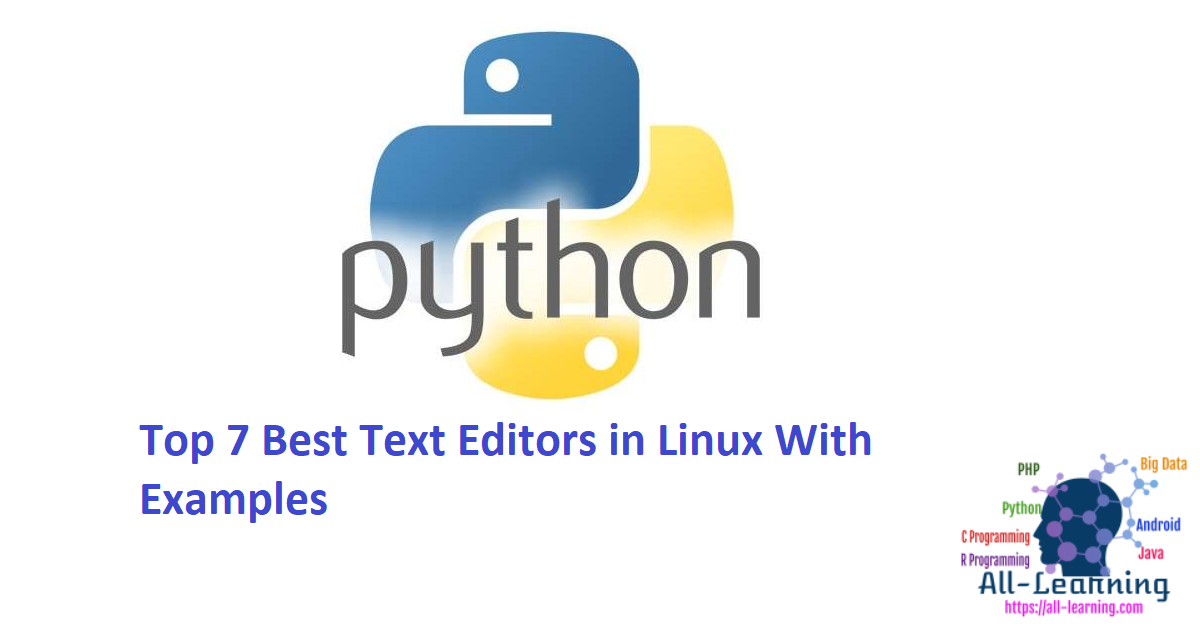 Text editors play a major role for Linux users. Whether it is setting up user instructions, editing configuration files or writing code scripts to run on your system, everyone has a text editor which suits their needs better than others.

Everyone has a favorite editor based on features and functionality. But with numerous options available to choose from, it becomes tough to find the best text editor which suits you. Today, we list five of the best text editors in Linux and why they might be the best choice for you.

1. VIM – The most advanced text editor

Leading our line for the best text editors in Linux is the VIM text editor. Developed by Bram Moolenaar, VIM is one of the most commonly used text editors in the Linux world. It is based on the old UNIX vi text editor, so far as the name, VIM refers to ‘Vi IMproved’. The VIM text editor offers features like syntax highlighting, split-screen functionality, automatic indentation, session tabs, and digraph input.

Beginners may usually find VIM require some effort to get used to. But if you want a powerful editor with advanced options and features, VIM is the choice for you.

VIM is available both as a GUI application and as a command-line utility. Available since 1991, VIM is the most commonly used text editor for Linux system admins across the globe for their work. Vim can become whatever you want it to be. With the innumerable plugins and extensions, your editor can look and perform like any other GUI editor.

Install VIM with the following command: While VIM is a classic in the debate of text editors, people often discuss the need for a new and powerful editor. This is where the Atom comes in. Developed by GitHub in 2015, Atom has soared into the popularity charts soon after its launch. The developers label Atom as the “hackable text editor for the 21st century”.

And they say this rightly so as no other text editor developed this century comes even close to the reputation that Atom holds in the Linux community today. It brings you to the deep end of text editors. The features available with Atom include package manager, multi-pane interface, file system browser and auto-completion

Like VIM, Atom comes both as a GUI application and a command-line utility. It is not for people whose only use of a text editor is to edit configuration files and perform other small tasks. Atom is best for programmers who want a beautiful user interface, along with powerful extensions like in-built Git integration, and more!

You can install ATOM with the following commands: The phrase that ‘good things are often not free’ suits Sublime Text better than anything else. Sublime Text was developed to be considered a full-fledged IDE and is the only freemium editor in this list.

Developed by the Sublime HQ in 2008, this Python-powered shareware is described as a “sophisticated text editor for code, markup, and prose” by its creators. Sublime Text offers a range of features such as simultaneous editing, split-screen mode, Pythons based APIs, and command pallet along with having a builtin support for numerous markup and programming languages.

Sublime Text is popular for not being a freeware in the Linux community. It is a text editor that offers useful native functions like GoToAnything and Distraction-free mode. Like Atom, Sublime Text is more focused on users who wish to use their text editor primarily for programming and developing scripts on their system. You can install sublime-text with the following command This editor comes pre-installed with a ton of functionalities and additions that make it a great replacement for Gedit and Pluma which has been used as the default editors in many distributions.

Linux mint has adopted Xed as the default GUI text editor instead of Gedit and after using it for long enough, we know exactly why. Xed is for programmers who love their text editors to be very flexible.

Apart from that, it’s also an X-app. You can go ahead and install Xed on your system with the following commands: We used it, and we loved it. Every single element of the editor is customizable, just like it is for VIM. The difference is, Gamma is complete GUI editor.

It’s very lightweight on resources and doesn’t hog memory like some of the more powerful GUI text editors do. Gamma Text editor allows you to enjoy a very powerful editor even on a low powered machine.

For Python lovers, Gamma is built entirely in Python. The packages for this editor may not be available for your distribution. So this installation method will be common for all the distributions. When people are new to text editors in Linux they often look for something simple to understand, yet having a powerful functionality, which they can benefit from once they are familiar with the editor. This is the domain where Gedit appeals a large chunk of its audience.

Developed under the GNU General Public License, it was initially released to the public in 2000. The Gedit text editor offers a wide range of features while having a simple to use GUI interface.

If you need a lightweight text editor with high plugin support and a wide range of powerful features, Gedit is the text editor for you. While it is a basic and easy to understand editor on the surface, its functionality makes Gedit a fairly competent editor.

You can install GEdit with the following command: It is easy to learn and use for beginners, while fairly keeping up with the requirements of an advanced user. Developed under the GNU General Public License, Nano was first launched in 2000. It soon spread among the public due to its simplistic and easy to grasp interface.

Nano works only as a command-line utility. It is great for users who need a simple text editor while working with the command line. Nano is easy to use even though it’s a command-line editor. Unlike VIM, it allows you to work with it in the same way as you’d with a GUI text editor.

You can install Nano with the following command: