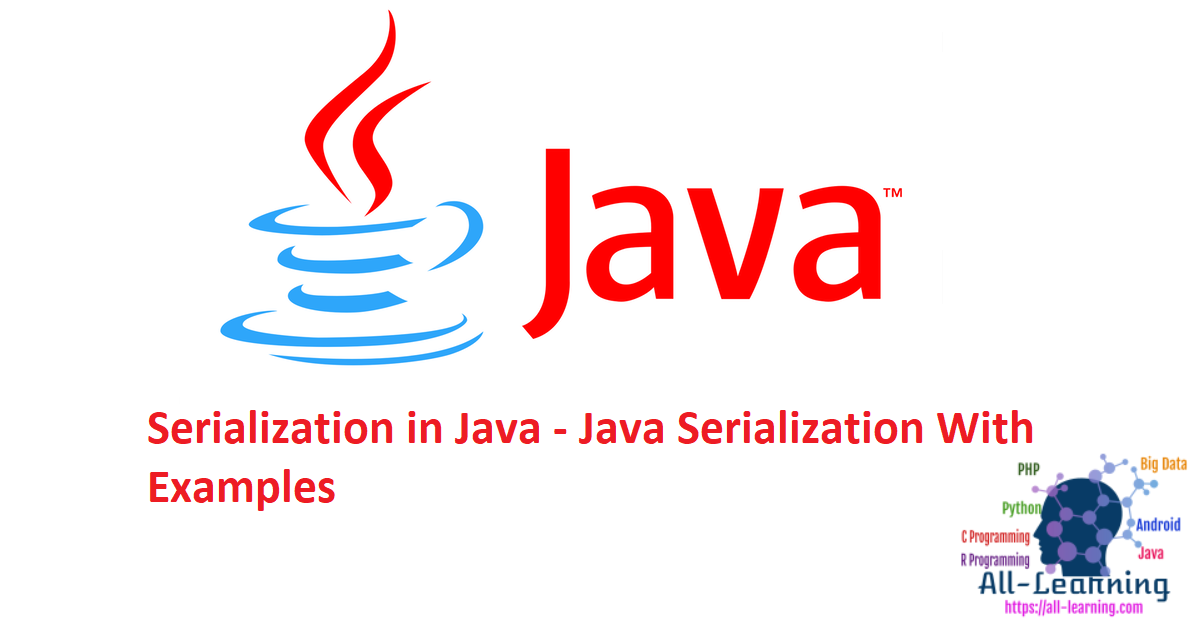 Serialization in Java was introduced in JDK 1.1 and it is one of the important feature of Core Java.

Serialization in Java allows us to convert an Object to stream that we can send over the network or save it as file or store in DB for later usage. Deserialization is the process of converting Object stream to actual Java Object to be used in our program. Serialization in Java seems very easy to use at first but it comes with some trivial security and integrity issues that we will look in the later part of this article. We will look into following topics in this tutorial.

If you want a class object to be serializable, all you need to do it implement the java.io.Serializable interface. Serializable in java is a marker interface and has no fields or methods to implement. It’s like an Opt-In process through which we make our classes serializable.

Notice that it’s a simple java bean with some properties and getter-setter methods. If you want an object property to be not serialized to stream, you can use transient keyword like I have done with salary variable.

Now suppose we want to write our objects to file and then deserialize it from the same file. So we need utility methods that will use ObjectInputStream and ObjectOutputStream for serialization purposes.

Notice that the method arguments work with Object that is the base class of any java object. It’s written in this way to be generic in nature.

When we run above test program for serialization in java, we get following output.

Since salary is a transient variable, it’s value was not saved to file and hence not retrieved in the new object. Similarly static variable values are also not serialized since they belongs to class and not object.

Class Refactoring with Serialization and serialVersionUID

But for all these changes to work, the java class should have serialVersionUID defined for the class. Let’s write a test class just for deserialization of the already serialized file from previous test class.

Now uncomment the “password” variable and it’s getter-setter methods from Employee class and run it. You will get below exception;

The reason is clear that serialVersionUID of the previous class and new class are different. Actually if the class doesn’t define serialVersionUID, it’s getting calculated automatically and assigned to the class. Java uses class variables, methods, class name, package etc to generate this unique long number. If you are working with any IDE, you will automatically get a warning that “The serializable class Employee does not declare a static final serialVersionUID field of type long”.

We can use java utility “serialver” to generate the class serialVersionUID, for Employee class we can run it with below command.

Note that it’s not required that the serial version is generated from this program itself, we can assign this value as we want. It just need to be there to let deserialization process know that the new class is the new version of the same class and should be deserialized of possible.

Notice that I have changed the field values before converting it to Stream and then while reading reversed the changes. In this way, we can maintain data integrity of some sorts. We can throw exception if after reading the stream data, the integrity checks fail. Let’s write a test program to see it in action.

When we run above program, we get following output.

So which one is better to be used for serialization in java. Actually it’s better to use Serializable interface and by the time we reach at the end of article, you will know why.

We have seen that serialization in java is automatic and all we need is implementing Serializable interface. The implementation is present in the ObjectInputStream and ObjectOutputStream classes. But what if we want to change the way we are saving data, for example we have some sensitive information in the object and before saving/retrieving we want to encrypt/decrypt it. That’s why there are four methods that we can provide in the class to change the serialization behavior.

If these methods are present in the class, they are used for serialization purposes.

Usually while implementing above methods, it’s kept as private so that subclasses can’t override them. They are meant for serialization purpose only and keeping them private avoids any security issue.

Sometimes we need to extend a class that doesn’t implement Serializable interface. If we rely on the automatic serialization behavior and the superclass has some state, then they will not be converted to stream and hence not retrieved later on.

This is one place, where readObject() and writeObject() methods really help. By providing their implementation, we can save the super class state to the stream and then retrieve it later on. Let’s see this in action.

SuperClass is a simple java bean but it’s not implementing Serializable interface.

Notice that order of writing and reading the extra data to the stream should be same. We can put some logic in reading and writing data to make it secure.

Also notice that the class is implementing ObjectInputValidation interface. By implementing validateObject() method, we can put some business validations to make sure that the data integrity is not harmed.

Let’s write a test class and see if we can retrieve the super class state from serialized data or not.

When we run above class, we get following output.

So in this way, we can serialize super class state even though it’s not implementing Serializable interface. This strategy comes handy when the super class is a third-party class that we can’t change.

Serialization in java comes with some serious pitfalls such as;

Java Serialization Proxy pattern is a way to achieve greater security with Serialization. In this pattern, an inner private static class is used as a proxy class for serialization purpose. This class is designed in the way to maintain the state of the main class. This pattern is implemented by properly implementing readResolve() and writeReplace() methods.

Let us first write a class which implements serialization proxy pattern and then we will analyze it for better understanding.

Let’s write a small test to check whether implementation works or not.

When we run above class, we get below output in console.

If you will open the data.ser file, you can see that DataProxy object is saved as stream in the file.

That’s all for Serialization in Java, it looks simple but we should use it judiciously and it’s always better not to rely on default implementation. Download the project from above link and play around with it to learn more.