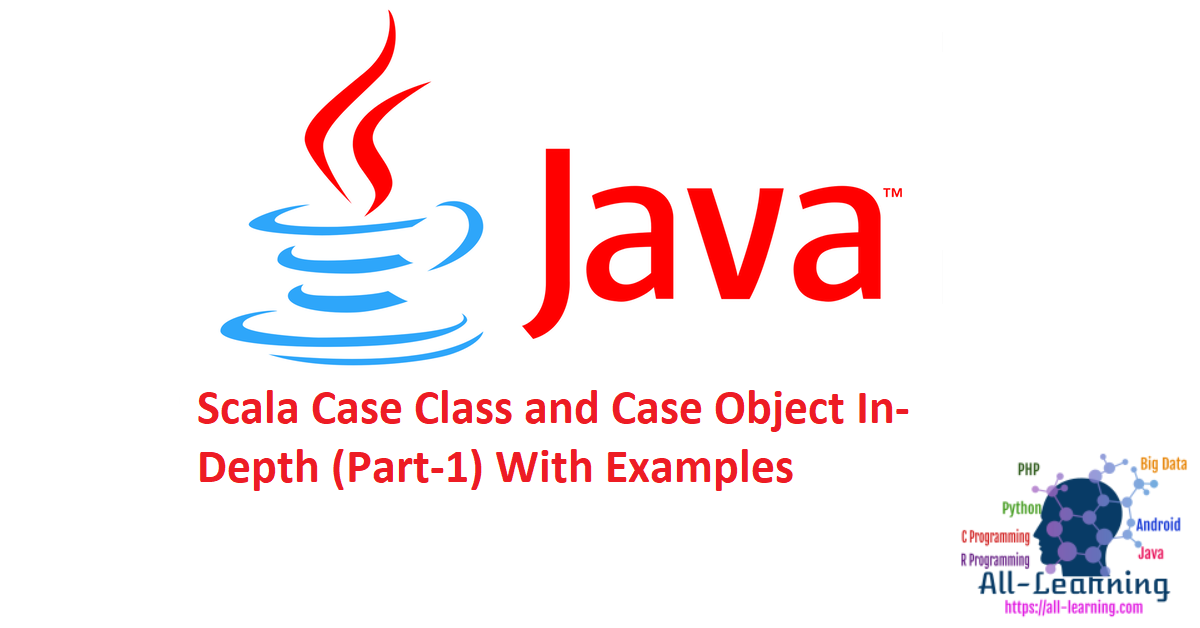 In this post, we are going to discuss about one of the important concept of Scala Language: Case Class and Case Object.

The main advantage or aim of Case Class concept is that to ease the development by avoiding lot of boilerplate code. We can use Case Classes in Pattern Matching very easily.

As this concept is very important, I’m going to deliver this into two different posts:

We will discuss “Case Class and Case Object Basics” in detail in this post with some suitable examples. Will deliver one more post for some advanced concepts.

What is Case Class?

Case class is also a class, which is defined with “case” modifier. Because of this “case” keyword, we will get some benefits to avoid boilerplate code.

Here we have defined a case class with name “Employee” and with one parameter “name”.

What is Case Object?

Case object is also an object which is defined with “case” modifier. Because of this “case” keyword, we will get some benefits to avoid boilerplate code.

Here we have defined a case object with name “Employee”.

Let us explore the benefits of Case Classes in-detail with examples.

First and foremost benefit of Case Class is that Scala Compiler adds a factory method with the name of the class with same number of parameters defined in the class definition.

Because of this benefit, we can create objects of the Case Class without using “new” keyword.

If we observe above code snippet, we can create Case class objects without using “new” keyword. It is also allowed “new” keyword, but not recommended to use it here.

By observing above example, we can say that Case class constructor parameters are by default val. We cannot reassign a new value to them once that class object is created. We can access their values by using getter methods, but they don’t have setter methods.

NOTE:- Before discussing the next benefit, we need to understand one point about Case classes.
When we compile a Case class using scalac, what will happen? How many “*.class” files are generated for one Case classes? What are they?

Let us explore this with a simple example:

Here we can observe that only one source file “Persona.scala” is available.

Here we can observe that Scala Compiler has generated two class files: “Person.class” and “Person$.class”

NOTE:- We will get similar kind of two classes even for Case Objects.

It is most important feature and very useful. Scala compiler automatically adds “Default Implementation” to toString, hashCode and equals and copy methods.

We can observe this in the following diagram. 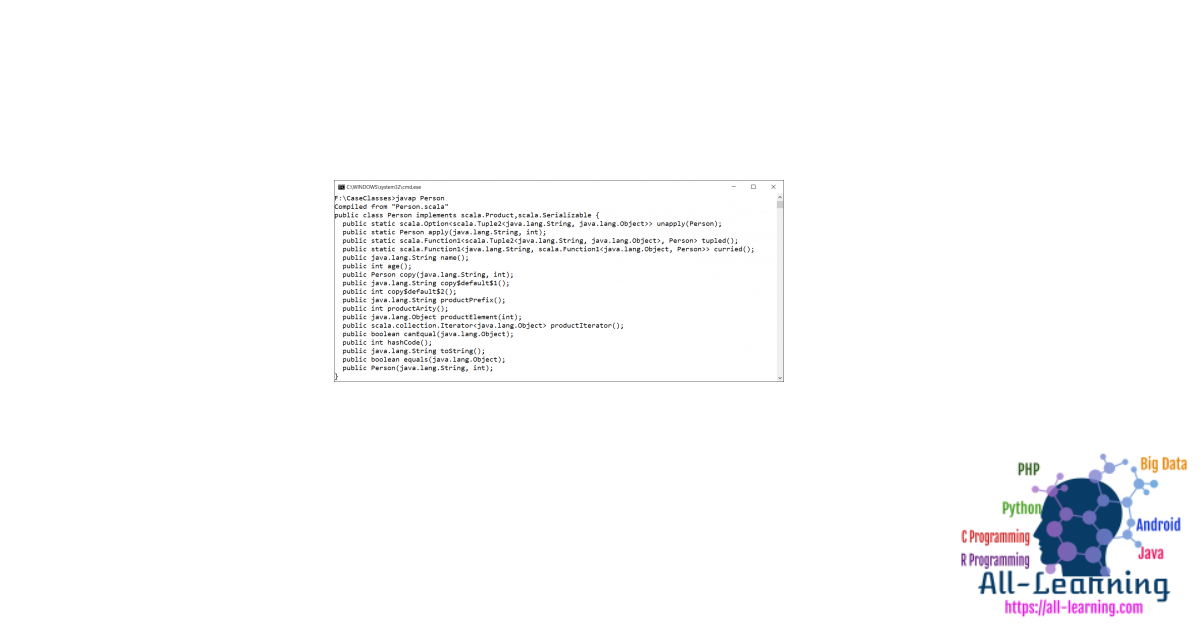 Scala compiler also adds a copy method to Case class automatically. It is used to create a copy of same instance with modifying few attributes or without modifying it.

We can observe this feature in the above diagram.

Example-1:- To create a new copy of same object without changing the object attributes.

Here, we have created new object s2 by using copy method on s1 object without changing s1 object attributes. That means both are equal as shown below:

Example:- To create a new copy of same object with changing the object attributes.

Here, we have created new object s3 by using copy method on s1 object without changing s1 object attributes. That means both are NOT equal as shown below:

Scala compiler also creates a companion object to that Case class and adds apply and unapply methods. We can observe this in the following diagram. 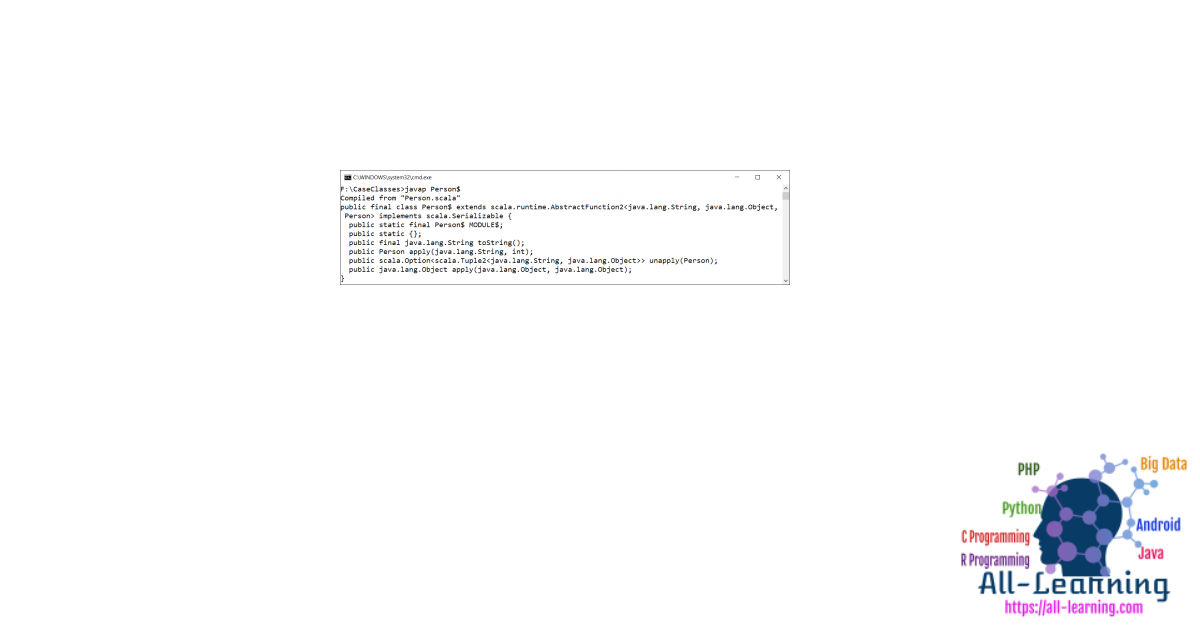 Example:-
If we create a Case Class as shown below:

Scala Compiler adds a Companion Object with apply and unapply methods as shown below:

So far, we have discussed what are the benefits of Scala’s Case Class. I’m going to list out all those benefits one by one in brief in next section.

NOTE:- Java does NOT have Case class or Case object concept.

Case class is also a class, however when we compare it with normal class, it gives us some extra features or benefits.

The following are the complete list of Advantages/Benefits of Scala’s Case class:

All these features are added by Scala Compiler at compile-time. It is not possible with normal class.

As we discussed in the above section, Scala’s Case Class/Object have many benefits. They ease the Development process and improve the the Productivity. However they have only few drawbacks and they are ignorable:

If we see compiled class using any Java/Scala Decompiler, we can observe the following code snippet.