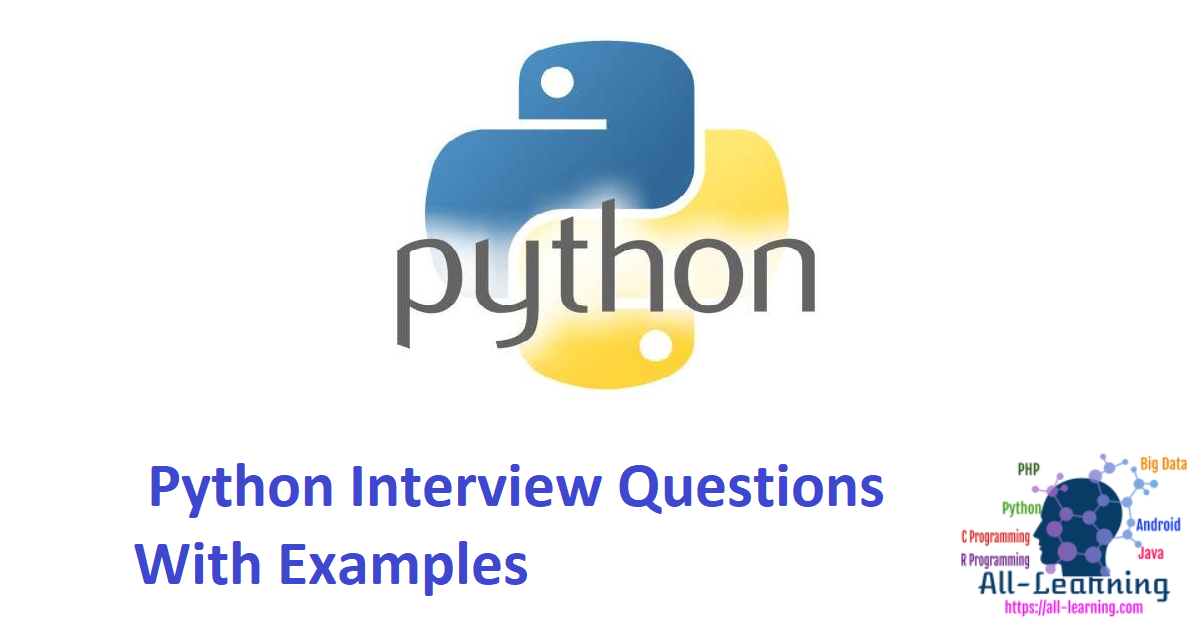 Python is the top most programming language these days. I have wrote a lot of python tutorials, here I am providing Python Interview Questions and Answers that will help you in python interview. These python interview questions are good for beginners as well as experienced programmers. There are coding questions too to brush up your coding skills.

Python is getting a lot of attention, specially in the field of data science, pen testing, scientific and mathematical algorithm development, machine learning, artificial intelligence etc.

I have been working on Python for more than 5 years now, all these python interview questions are coming from my learning on the job as well as the interviews I have taken for Python developers role. You should bookmark this post as I will keep on adding more interview questions to this list in future.

What is Python? What are the benefits of using Python?

Python is a high level object-oriented programming language. There are many benefits of using Python. Firstly, Python scripts are simple, shorter, portable and open-source. Secondly, Python variables are dynamic typed. So you don’t need to think about variable type while coding. Thirdly, Python classes has no access modifiers which Java have. So, you don’t need to think about access modifiers. Lastly, Python provides us different library, data-structure to make our coding easier.

Does Python use interpreter or compiler? What’s the difference between compiler and interpreter?

Basically PEP 8 is a style guide for coding convention and suggestion. The main objective of PEP 8 is to make python code more readable.

What are the differences between Python 2.x and Python 3.x?

Why do you need to make your code more readable?

We need to make our code more readable so that other programmer can understand our code. Basically for a large project, many programmers work together. So, if the readability of the code is poor, it will be difficult for other to improve the code later.

How many Keywords are there in Python? And why should we know them?

What are the built-in data-types in Python?

The built-in data-types of Python are

Among them, the first three are immutable and the rest are mutable. To know more, you can read our
Python Data Types tutorial.

How many types of operators Python has? Give brief idea about them

Python has five types of operators. They are

What is the output of the following code and why?

The output of the following code will be

The following code will determine either the input year is a leap year or not.

Below image shows the sample output of above program. What should be the output of the following code and why?

The following code will result in SyntaxError. Because the break statement is not in a loop. It should be under the scope of a loop.

What is the statement that can be used in Python if the program requires no action but requires a statement syntactically?

What are the advantages of Python Recursion?

Implementing something using Python recursion requires less effort. The code we write using recursion will be comparatively smaller than the code that is implemented by loops. Again, code that are written using recursion are easier to understand also.

What are the disadvantages of Python Recursion?

What is lambda in python?

Python lambda is a single expression anonymous function which has no name. Therefore, we can use Python lambda for a small scope of program.

Why doesn’t Python lambda have any statement?

Python lambda doesn’t have any statement because statement does not return anything while an expression returns some value. The basic syntax of python lambda is

The value of the expression for those arguments is returned by Python lambda.
To know more with examples, read our Python Lambda tutorial.

What do you understand by Python Modules?

A file containing Python definitions and statements is called a python module. So naturally, the filename is the module name which is appended with the suffix .py.

A module print_number given, what will be the output of the following code?

The output of the program will be like this.

Because PF refers the function printForward. So it passes the argument to the function and the result will be like given one.

Read our tutorial on Python modules to have clear idea on this.

What do you understand by Python Package?

Python package is a collection of modules in directories that give a package hierarchy. More elaborately, python packages are a way of structuring python’s module by using “dotted module names”. So A.B actually indicates that B is a sub module which is under a package named A.

What will be the output of the following code? Explain the output

The output of the following code will be:

Because 0x10 is a hexadecimal value which decimal representation is 16. Similarly 0o10 is a octal value and 0b10 is a binary value.

Will this code output any error? Explain.

This will not produce any error. Because 3 + 4j is a complex number. Complex number is a valid data-type in Python.

What will be the output of the following code?

The code will output 2. Because whatever statements the try block has, the finally block must execute. So it will return two.

What will be the output of the following code2? Explain

The code will output 3. As no error occurs, the try block will execute and the value a is changed from 2 to 3. As the return statement of finally block works. The last line of the function will not execute. So the output will be 3, not 10.

What is namespace in Python?

Namespace is the naming system to avoid ambiguity and to make name uniques. Python’s namespace is implemented using Python Dictionary. That means, Python Namespace is basically a key-value pair. For a given key, there will be a value.

Why do we need Python Directories?

Suppose, you are making some a software using Python where you need to read/write files from different directories. The directories can be dynamic so that you cannot fix the directory from your code, rather you need to choose the directory dynamically. After choosing the directory, you may have to create a new directory or write a file or read a file from that directory. To do so, Python has introduced this facility.

How to get current directory using Python?

To get current Directory in Python, we need to use os module. Then, we can get the location of the current directory by using getcwd() function. The following code will illustrate the idea

To get more examples, see our tutorials on Python Directories.

Why Should We Use File Operation?

We cannot always rely on run-time input. For example, we are trying to solve some problem. But we can’t solve it at once. Also, the input dataset of that problem is huge and we need to test the dataset over and over again. In that case we can use Python File Operation. We can write the dataset in a text file and take input from that text file according to our need over and over again.
Again, if we have to reuse the output of our program, we can save that in a file. Then, after finishing our program, we can analysis the output of that program using another program. In these case we need Python File Operation. Hence we need Python File Operation.

To close a file in Python we should use close() function. Mainly there is two reasons why we should close files after use. Firstly, Python does not promise that it will close the files for us. The operating system does, when the program exits. If your program does something else for a while, or repeats this sequence of steps dozens of times, we could run out of resources, or overwrite something. Second, some operating system platforms won’t let the same file be simultaneously open for read-only and for write. So, if the two filenames happened to be the same file, we might get an error trying to write without having closed the input file.

To know more, see our tutorial on Python File.

What are python dictionaries?

What are the differences between del keyword and clear() function?

The difference between del keyword and clear() function is, del keyword remove one element at a time. But clear function removes all the elements. The syntax to use the del keyword is:

While the syntax for clear() function is:

To know more see our tutorial on Python Dictionary.

What is Python Set?

How will you convert a string to a set in python?

We can convert a string to a set in python by using set() function. For examaple the following code will illustrate the idea

What a blank curly brace initialize? A dictionary or a set?

Well, both Python Dictionary and Python Set requires curly braces to initialize. But a blank curly brace or curly brace with no element, creates a dictionary. To create a blank set, you have to use set() function.

As the name says, Python’s split() function helps to split a string into substrings based on some reference sequence. For example, we can split Comma Separated Values(CSV) to a list. On the other hand, join() function does exactly the opposite. Given a list of values you can make a comma separated values using join function.

What is Python Decorator?

What do you understand by Python Generator?

What do you understand by Python iterator and Iterable elements?

Most of the objects of Python are iterable. In python, all the sequences like Python String, Python List, Python Dictionary etc are iterable. On the other hand, an iterator is an object which is used to iterate through an iterable element.

What do you know about iterator protocol?

What will be output of the following code? Explain

Why do we need operator overloading?

What is the difference between tuples and lists in Python?

The main differences between lists and tuples are, Python List is mutable while Python Tuples is immutable. Again, Lists are enclosed in brackets and their elements and size can be changed, while tuples are enclosed in parentheses and cannot be updated.

We can sort a list by using sort() function. By default a list is sorted in ascending order. The example is given

How can you sort a list in reverse order?

We can sort a Python list in reverse order by using sort() function while passing the value for key ’sorted’ as false. The following line will illustrate the idea.

How will you remove all leading and trailing whitespace in string?

How can you pick a random item from a list or tuple?

You can pick a random item from a list or tuple by using random.choice(listName) function. And to use the function you have import random module.

How will you toggle case for all letters in string?

To toggle case for all letters in string, we need to use swapcase() Then the cases of all letters will be swapped.

In Python what is slicing?

Python slicing is the mechanism to select a range of items from a sequence like strings, list etc.
The basic syntax of of slicing is listObj[start:end+1], here the items from start to end will be selected.

How will you get a 10 digit zero-padded number from an original number?

We can get a 10 digit zero-padded number from an original number by using rjust() function. The following code will illustrate the idea.

What is negative index in Python?