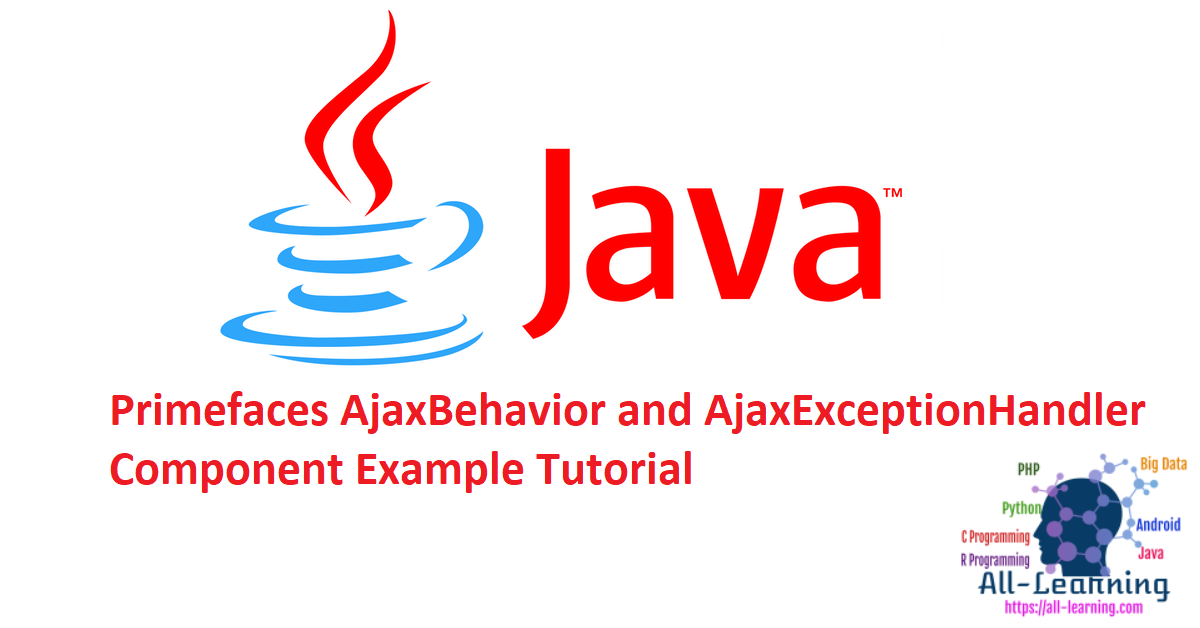 Different tutorials were provided here have introduced various Primefaces components and the way in which Ajax component could be used for ajaxifying. Using of ajax component won’t be helpful if you don’t look at deeply. This tutorial aimed to help you gather the required information that makes the use of ajax component much easier.

Besides all of that important information that you will get here about ajax component, following also the life-cycle of the ajax request/response phases as it’s supported by the JSF 2 framework.

This tutorial assumed that you’re using Eclipse IDE and Maven building tool for developing the suggested samples below. In case you’re never using it, it’s good for you looking into Primefaces beginners tutorial that help you doing that easily.

Since JSF 2 release, ajax request/response becomes supported by the JSF lifecycle intuitively. No additional phases added for the original well-known JSF lifecycle, rather the same lifecycle has been evolved to serve the Asynchronous JavaScript And XML (Ajax) request/response mechanism. This tutorial isn’t intended for covering all details of ajax behavior that built-in originally. Keeping you aware of the original mechanism that was provided by the JSF implementation for ajaxify is the goal of this tutorial. More detailed information would be provided later in a specific JSF 2 tutorial.

The below figures depict you which phases are executed for handling the ajax request and which ones for a response. 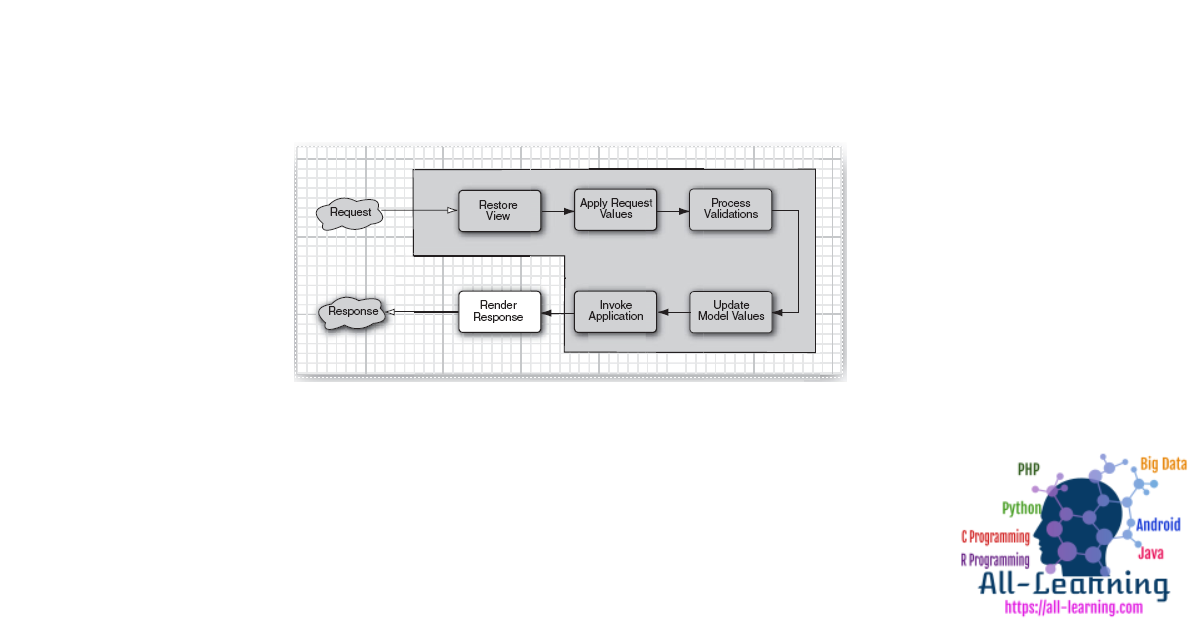 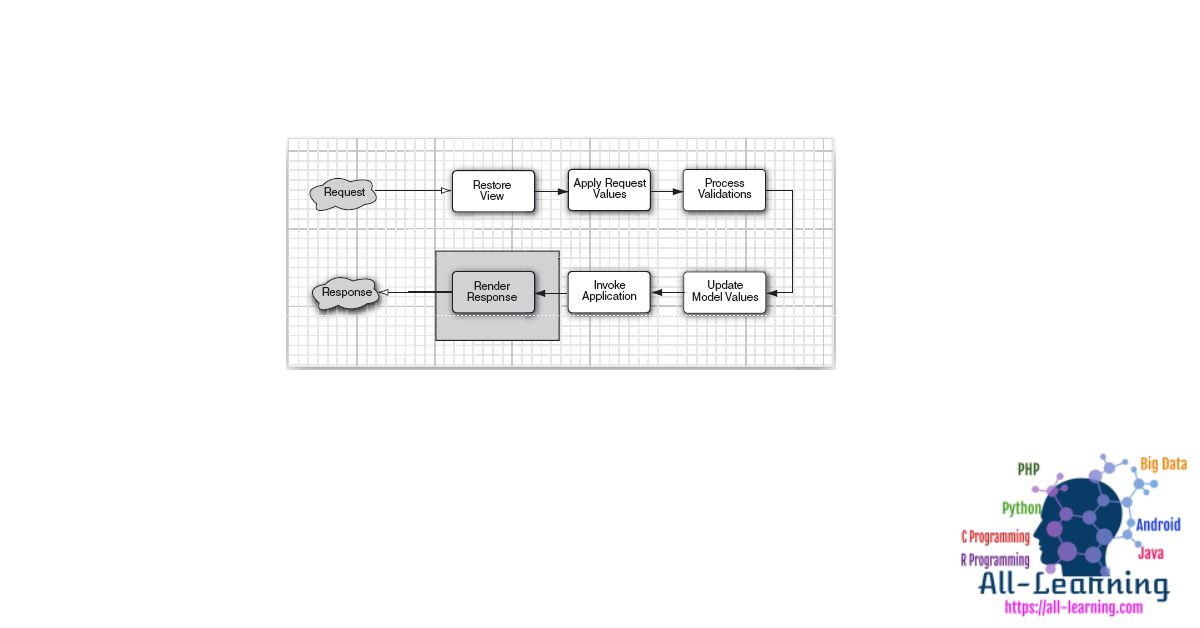 JSF 2.0, splits the jsf lifecycle into two parts: execute (where components are executed) and render. Any given ajax request you can specify your executed components as well as those rendered.

The main goal of Ajax is to process the partial form rather than processing the whole form. Using ajax help you submitting those components mentioned in the process while the only components mentioned in the update are rendered and modified. At the other side, using a normal request/response, the whole form has been processed and updated per every request/response cycle which may cause a performance headache or end user uncomfortable issues.

Following below sample of input component that associated with p:ajax for ajaxifying the input itself. Ajax request ha
s initiated as soon as the keyup event triggered, meanwhile the output component will be updated accordingly.

As you’ve noticed above:

Look at the running demonstration below: 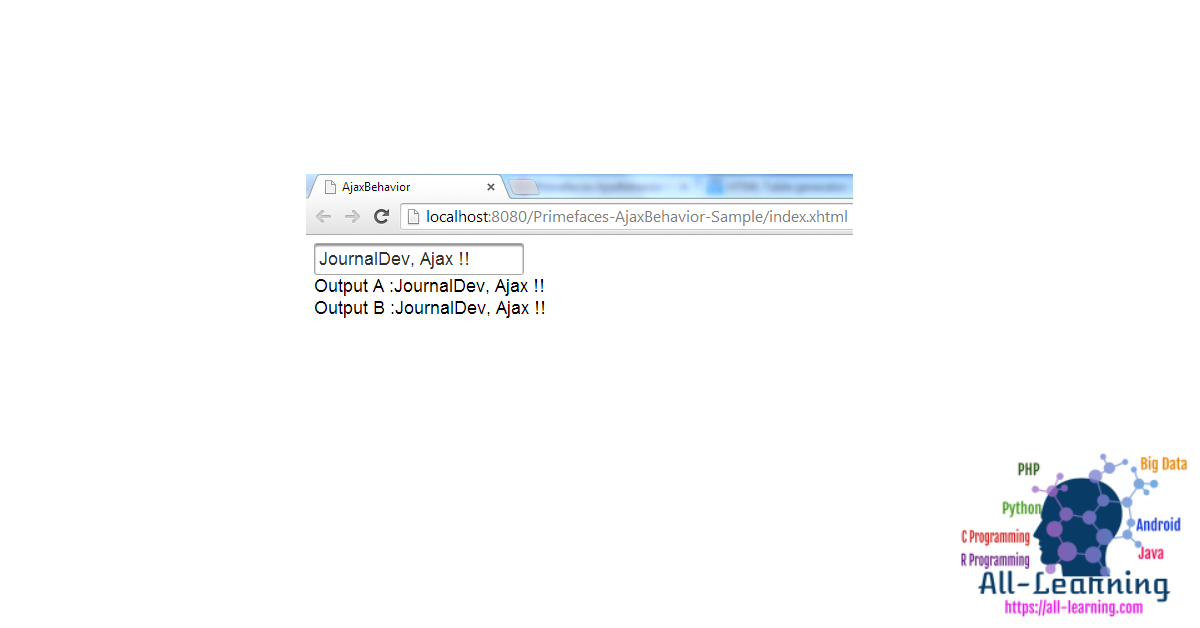 Ajax component can be associated with a listener. Listener is a method binding that executed every time in which ajax request has triggered. Below a sample for listening of keyup event.

Find out below the output of printed messages into the console at every time the ajax request has initiated. These messages handled by using the listener invocation. 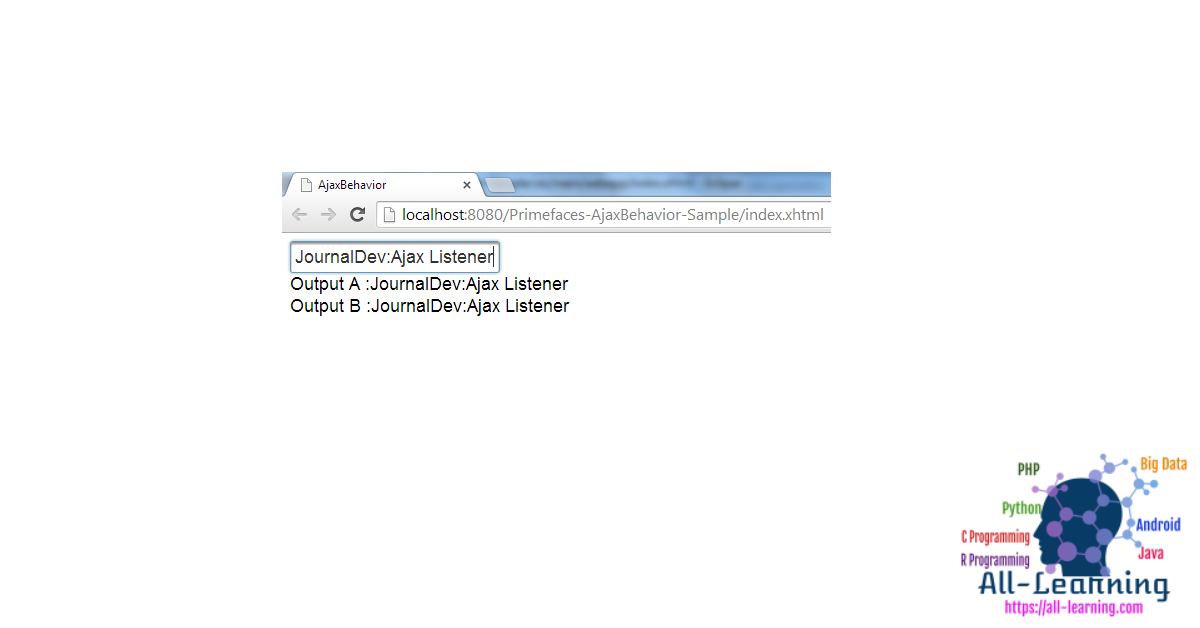 Before Primfaces 5 release, catching of exceptions and errors was very hard and needs a lot of additional work like browser and jsf lifecycle phases debugging especially when it comes to deal with Ajax.

Most of the developers want to use the ajax mechanism were faced circumstances where everything seems accomplished but even though the ajax request doesn’t trigger. Primefaces 5 provides you a powerful ExceptionHandler out of the box featuring support ajax and non-ajax request. p:ajaxExceptionHandler component to handle ajax exceptions at the same page.

ExceptionHandler and an ElResolver configured is required in the faces configuration file.

As you’ve noticed above:

ExceptionHandler is integrated with error-page mechanism of Servlet API. At the application startup Primefaces parses the error pages and uses this information to find the appropriate page to redirect to based on the exception type. Now, the same NullPointerException above should be handled through using both of error-page  concept and the implicit object pfExceptionHandler.

In order to allow your exception displayed into error-page, you should define the error-page into your web.xml and configured your Ajax exception handler to be used. Following below the result of executing the above sample. 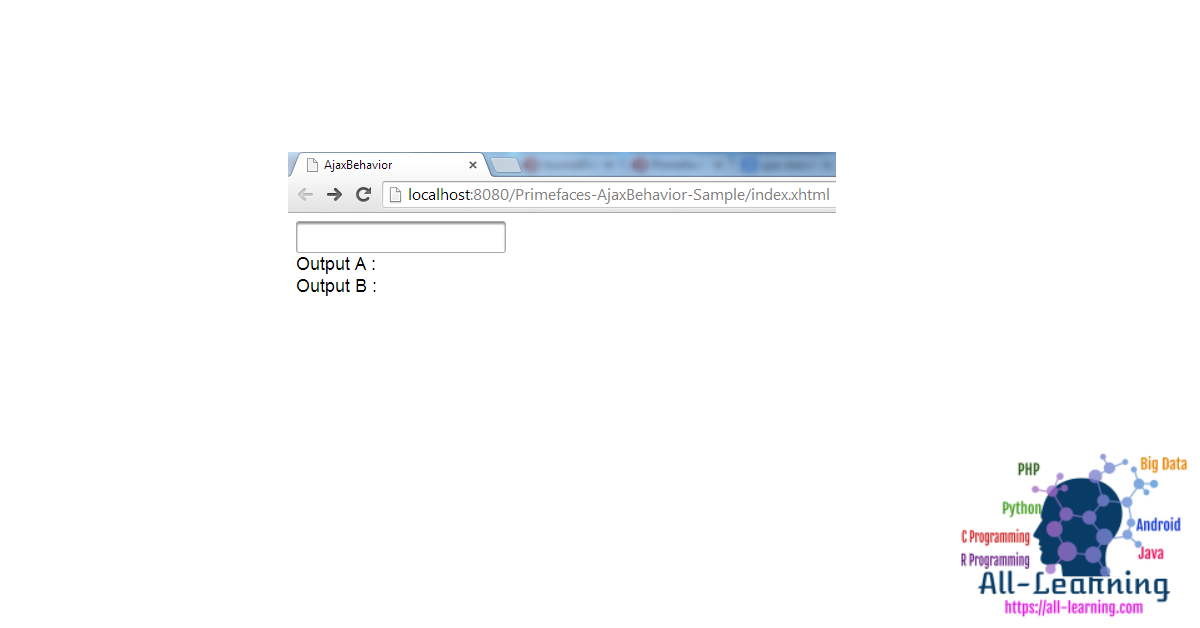 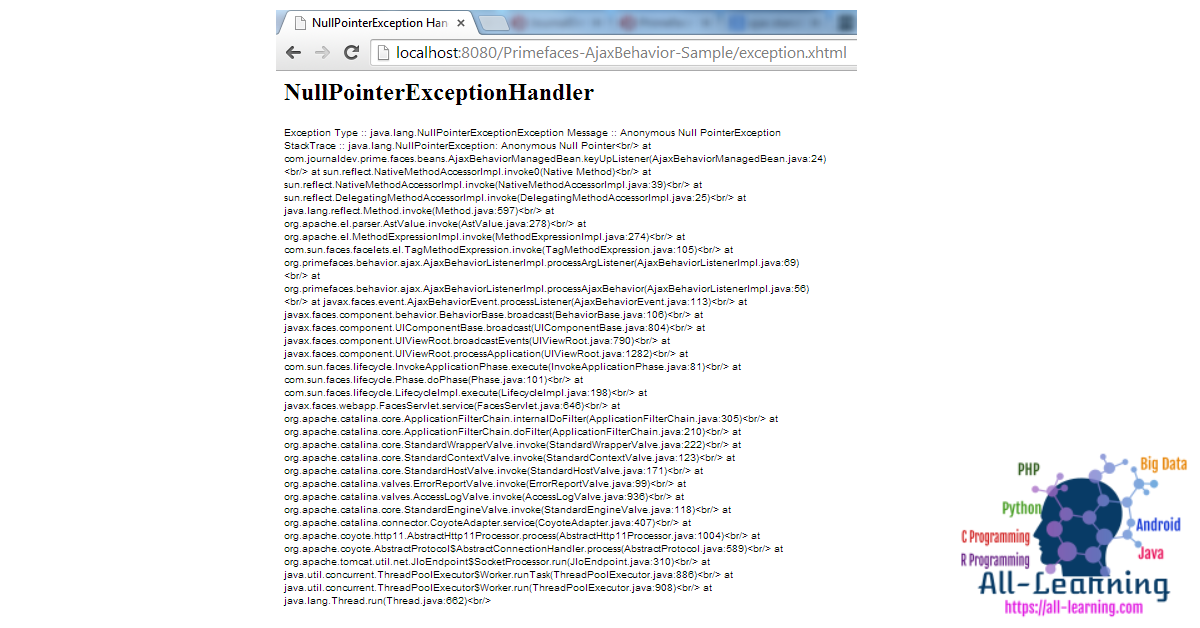 As you’ve noticed, custom error-page is used for handling the thrown exception. Implicit pfExceptionHandler is used for providing the displayed information above.

Multiple components were provided here are used the ajax component to Ajaxify their behaviors. This tutorial spots light into the Ajax lifecycle, AjaxBehavior Primfaces component and the mechanism of handling Ajax exceptions either inside the same page or by using the error-page Servlet API methodology. You should download the final project from the below link and check other attributes to learn more.