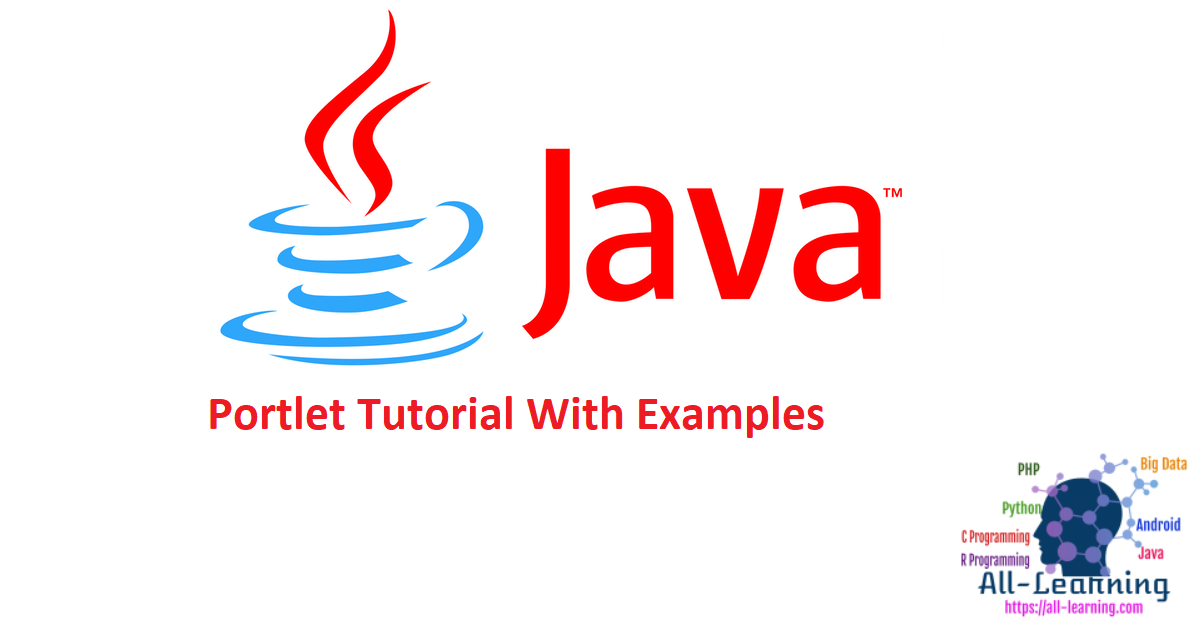 We’ve introduced all of these concepts that would be used while you’re dealing with the Portlet development. Portlet and Portlet container had used several objects that make obligation between both of them to get their functionality achieved.

However, no one of these tutorials have provided you a full detailed explanation for these fine-grained objects. To get into real development, you should be aware of these objects as well as you must have to know what these objects are closely,  how can they are used and when their usage should be to get the most benefit.

This tutorial intended to help you getting these information in an organised manner as it’s also will make you use all of them willingly. Following below core concepts that you would pass through:

PortletRequest interface provides methods for accessing various types of needed information. These information would be:

Request Attributes:  request attributes used mainly to pass Java objects between Portlets, Servlets and JSP pages. These attributes are formed as name/value pairs, in that the String will form the name of the attribute while Java Object is the value.

A more detailed sample would be discussed, especially when it comes to use the JSF bridge that already facilitate sending objects through using of request attributes.

Request Parameters:Request parameters aren’t so differ from discussed request attributes, they’re pairs of name/value where both of them are a String object. The most important issue here are the sources that request parameter come from. Typically, request parameters are those appended onto Portlet URL (e.g ActionURL, RenderURL), submitted by the form or set during execution of action request.

Both of processAction() and render are read the request parameters using the same methods; getParamaterMap(), getParameter(), getParameterNames() and getParamaterValues() are used for this purpose. Following sample shows you how can we develop simple Login form where you must enter journaldev as a username and password to get logged into. 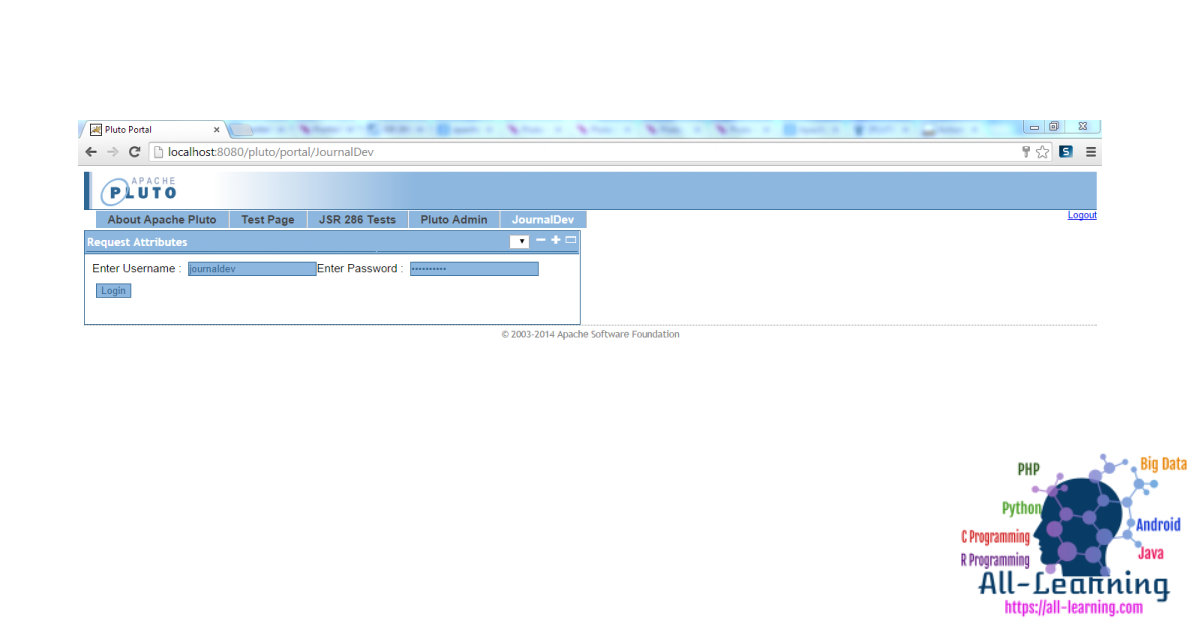 Context path can be specified by using either of action or render requests.

Preferred Locales & Internationalization: It’s also possible for you to query the current locale that will be used for rendering the content. You may invoke the getLocale() or getLocales() for getting the current locale used and the list of locales for which the Portlet could provide the content for the Portal.

Retrieving The Schema, Server Name and Port: Similar for HttpServletRequest, PortletRequest provides you the needed methods for inquiring the schema of the URL used for the request (e.g http, https, ftp, etc), the server’s name and the port number that the application is listening for.

Even you’re probably won’t get used these methods as you don’t need to create the needed URLs by yourself. Methods like createActionURL() and createRenderURL() will be used alternatively.

As we’ve seen previously, render() method takes a RenderRequest as one of the arguments. RenderRequest is used to represent the request for the render phase.

At the same time, the request that’s passed for processAction() method is of type ActionRequest and it represents the request for the action phase.

ActionReqeust provides you two different methods that will help you read the content of the request body, getReader() and getPortletInputStream() are used for this purpose. Mainly, if your form posted data its MIME type is application/x-www-form-urlencoded, the Portlet container will read the request body on behalf of you and you will get the form’s data as a request parameters.

As soon as you’ve called a getReader() or getPortletInputStream() while reading the request body from a form’s its MIME type is application/x-www-form-urlencoded, you’ve surly got an IllegalStateException that print out the message says User request HTTP POST data is of type application/x-www-form-urlencoded. This data has been already processed by the portlet-container and is available as request parameters.

You’re able of getting read the form’s data that MIME value is multipart/form-data. But be careful as you can open one reader at the same time. As soon as the getReader() has been used, using of getPortletInputStream() will throw an IllegalStateException and the same case when opposite is happened. Following sample shows you how can we submit two different forms, one of them is aimed to upload the file.

PortletResponse provides you a three methods only, setProperty(), getProperty() and encodeURL(). These methods that are relevant for properties will be discussed while introducing the Portlet cache concept. Using of encodeURL() is mandatory for some of Portlet container implementations, in that some resources (e.g Servlet, JSP, etc) within the Portlet application need to be referenced using some additional data like SessionID and may others.

According to Java Portlet Specification, if encoding isn’t needed, the Portlet container will return the URL unchanged.

But as soon as you’ve used getWriter(), you cannot able of using the getPortletOutputStream() and the opposition is valid. In case you’ve used both of them to handle the content draw, you will get an IllegalStateException.

The major facility has provided by the RenderResponse object is the getNamespace() method that’s used in a JavaScript code for variable naming identification. Following sample shows you two Portlets have referenced the same Portlet class and they’re provided the same JavaScript method. Let’s look at the scenario before getting getNamespace() used. 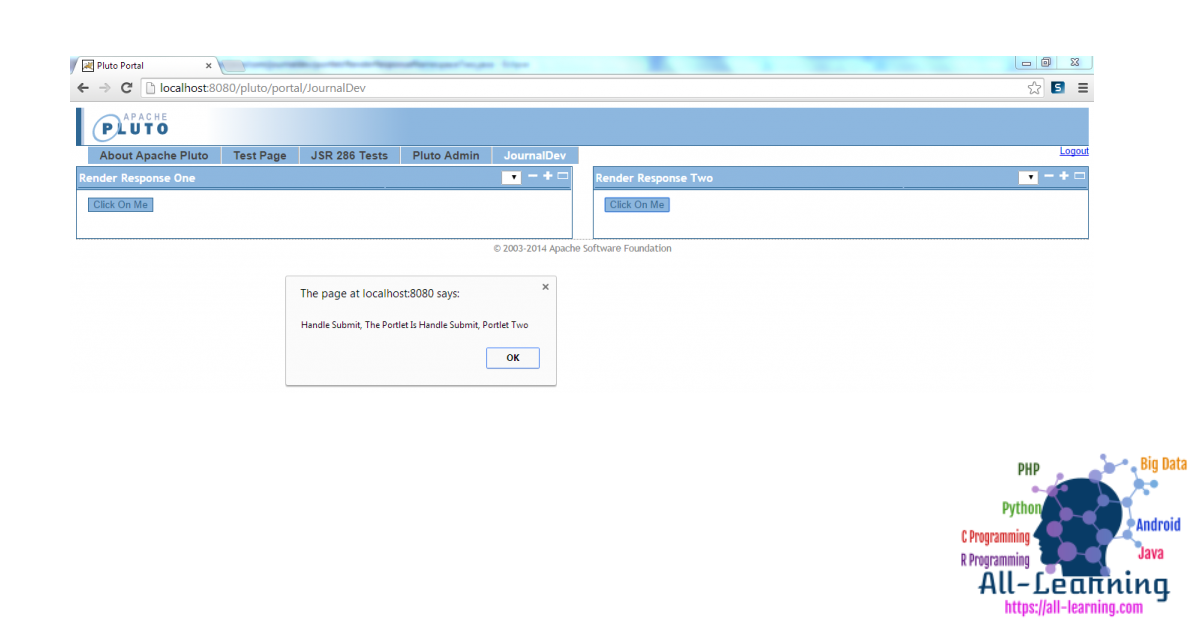 To get this issue resloved, getNamespace() can be used, following below the solution that you may use as long as your JavaScript code is listed on the Portlet itself.

Typically, action response used for two different major missions; for passing the parameters for the render phase through using of setRenderParamater() and for redirect the request into any other resources than let the normal flow proceeds. Redirection has been done using of sendRedirect() as you can redirect into any resources like Servlet or JSP. Both of these behaviors are discussed and we also had provided samples for both of them.

Portlet API contains a lot of concepts that we must be aware of. This tutorial has discussed the most APIs that you should be familiar with as they would be helpful in the next coming tutorials. Contribute us by commenting below and find downloaded source code.