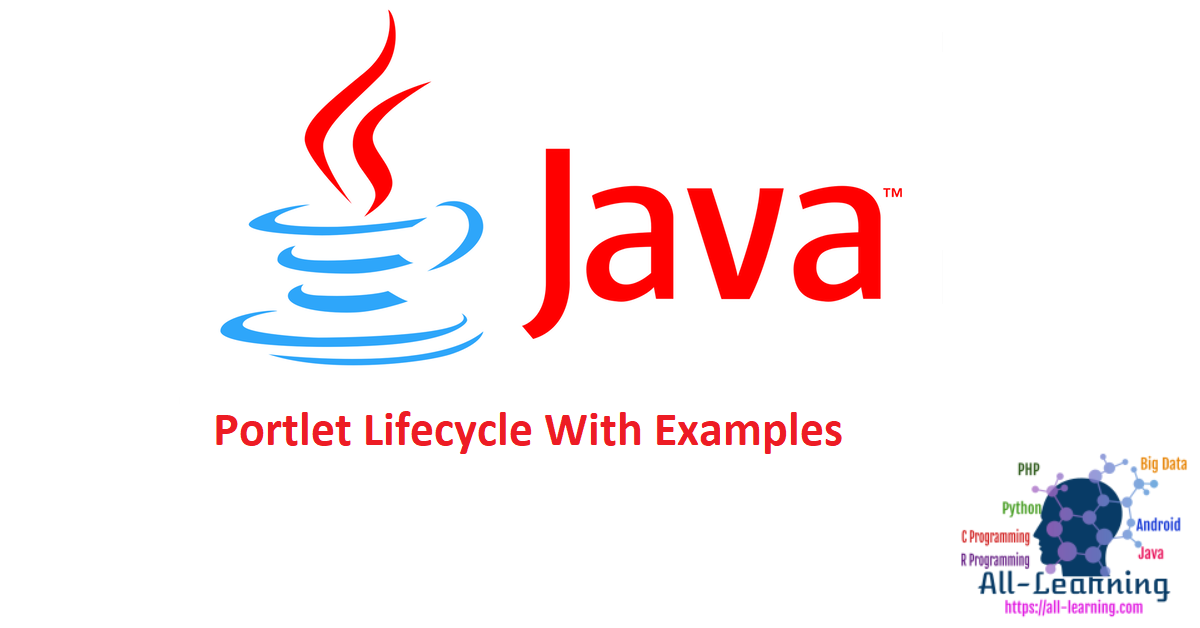 As we’ve seen previously, Portlet is conceptually very similar to Servlet as they can only operate within a container. Both Servlet and Portlet have an obligations that their design must satisfy to allow them interact with their containers.

Let’s firstly starting by developing our first Portlet by implementing the Portlet interface than using of GenericPortlet and highlights the most important things.

Now, let’s see what might happen if we have removed the deployed WAR and its unpackaged folder. Absolutely, removing your deployed application will get the context listener to be invoked as it will destroy the all resources that are deployed including these defined Portlets inside the portlet.xml file. 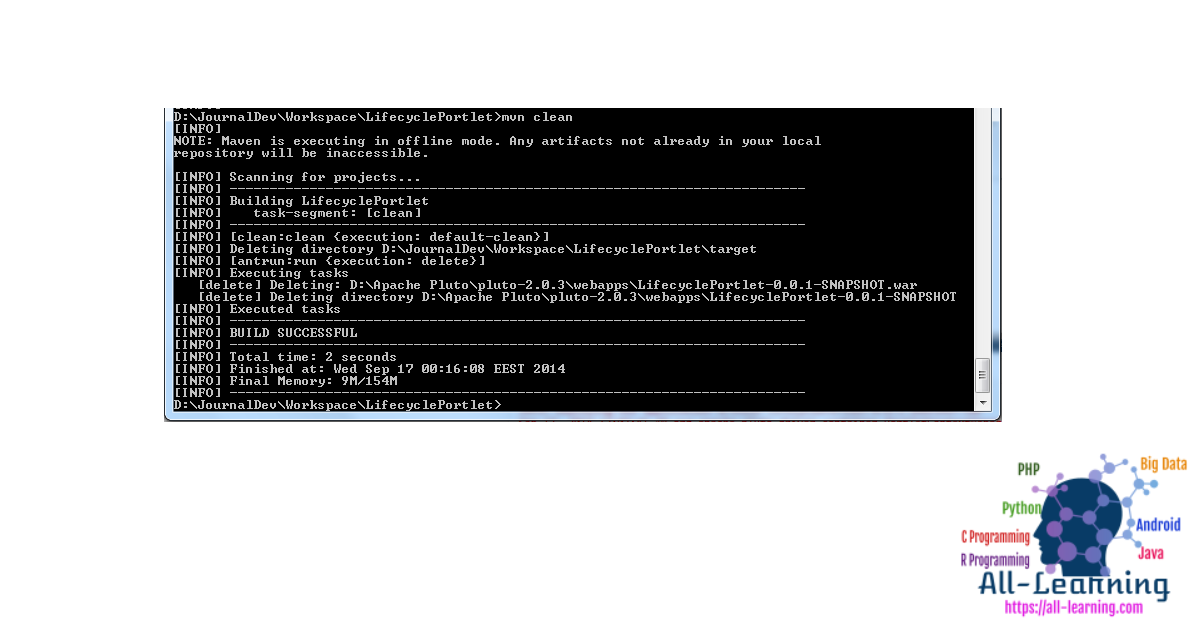 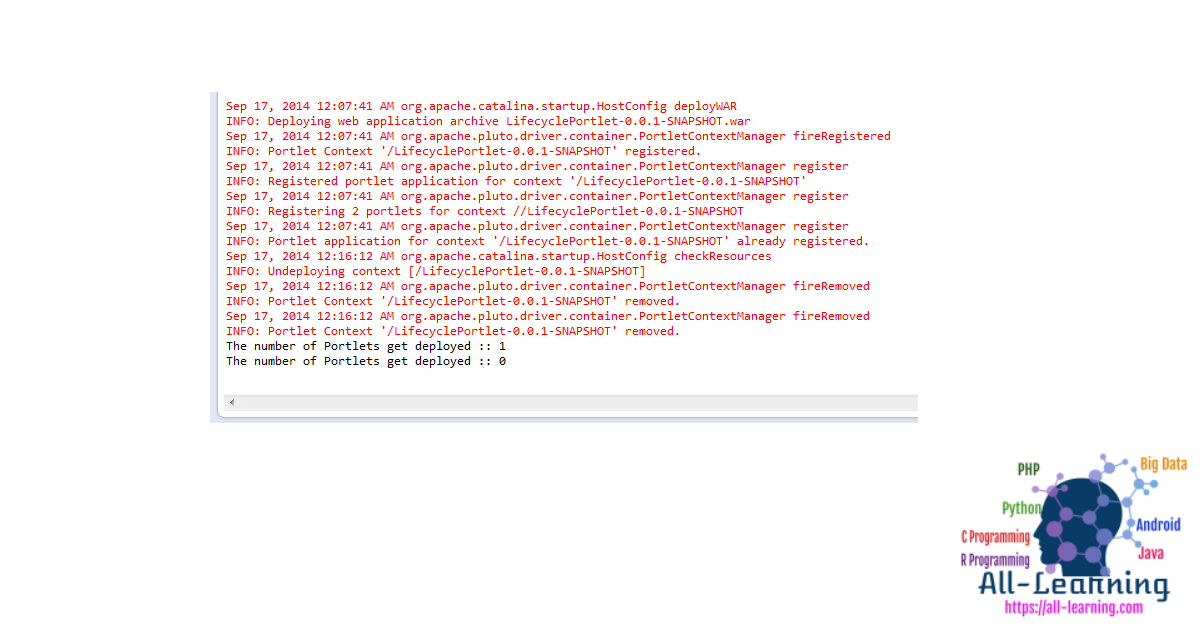 As we have two deployed Portlets (PortletOne, PortletTwo), we print out the numbers of remaining Portlets inside the destroy() method. This method has invoked similar to Servlet’s destroy() method that’s invoked once the contained project has undeployed.

If you’ve looked deeply at the console messages, you should notice the Portlet context /LifecyclePortlet-0.0.1-SNAPSHOT be removed. Usually, the concepts of undeploy and context removal are used interchangeably.

As simple as that, we can break down the Portlet lifecycle into these below stages:

The creation of the Portlet is the most expensive and complicated phase among mentioned phases as it consists of three distinct steps: loading the classes, invoking the constructors and initializing the Portlet.

The most important thing that you must take care of is the time needed of Portlet’s resources to be initialized, for which the Portlet would wait until it’s finished to serve the first request. Once the first request has served, every request that’s coming after so would be served normally.

Until the init() method has been invoked successfully, the Portlet isn’t considered as an active Portlet. In case your Portlet class has provided some of static initialization blocks, they must not trigger any methods that make this assumption.

Init() method is error-prone by its nature, you may access a database that’s already down or you don’t have a proper permission over it. For such cases, init() has defined as it throws a PortletException. You may also can throw an UnavailableException in between, but regardless of the exception type being thrown, you must ensure that all resources that been acquired are released as the destroy() method won’t be called subsequently. However, failure of initialization does mean that the Portlet container won’t place the Portlet object into active service and it must release the Portlet object.

In case you’ve got a RuntimeException during initialization, it must be handled as a PortletException.

Once the Portlet get initialized, it’s become waiting for users interactions. The interactions with the Portlets can be done through set of requests, these requests are translated into render() and processAction() requests.

Action requests are are asking the Portlets to change the state of its underlying application, while the render requests are displaying the Portlet with its current states. Practically, a subsequent render() request has be
en initiated once the processAction() got finished.

As we’ve stated previously, you can make a render request and action request by calling createRenderURL() and createActionURL() respectively against passed response object.

RenderResponse is also responsible of writing the Portlet’s content fragment into Portal page as it’s also capable to render URLs into that content, which will invoke actions to the Portlet (e.g createActionURL(), createRenderURL(), etc).

ActionRequest object represents the opportunity to change the state of the Portlet, it provides everything that’s already offered by PortletRequest along with direct access to the content of the HTTP request made by the user of the Portal. To respond to processAction() the Portlet should update its ActionResponse object which provides methods to:

The processAction() proposed above makes a trivial change for the actionCount counter and so it doesn’t have to inform the container of any changes via the response. Following sample shows you how can use the ActionResponse to make a change in the response. 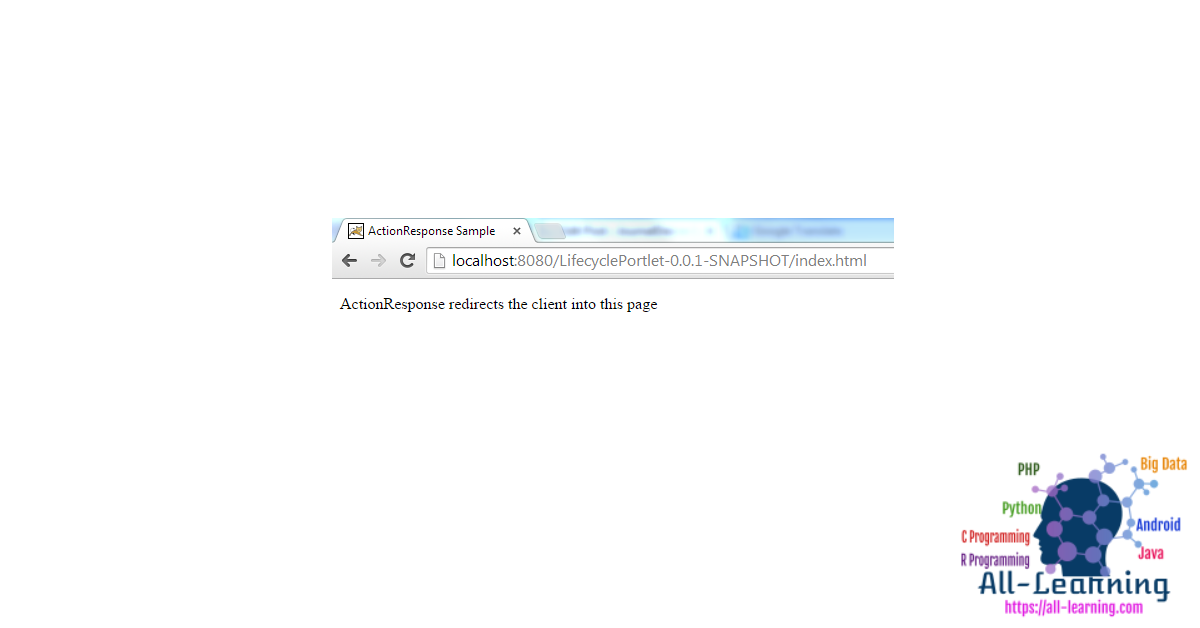 Here’s some of important points need to notice:

As we’ve stated earlier, the destroy() method won’t be invoked as a subsequent phase when the initialization phase is failed. To allow Portlet container from destroying a certain Portlet, the Portlet must be instantiated and initialized successfully and all processing threads on the Portlet’s instance have completed.

According to Java Portlet Specification 2.0, The Portlet container is able to handle the requests concurrently. Portlet developers must design their Portlets to handle concurrent execution from multiple threads from within the processAction() and render() methods or any of the optional lifecycle methods, like prcoessEvent() or serveResource(), at any particular time.

Actually, implementations of the request and response objects aren’t guaranteed to be thread safe. This means that they must only be used within the scope of thread invoking the processAction(), render(), processEvent() and serveResource() methods.

To remain Portable, Portlet applications shouldn’t give references of the request and response objects to objects executing in other threads as the resulting may be non-deterministic.

In other words, any combination and number of simultaneous calls to render() and/or processAction() would be safe unless the Portlet has used an instance variables and/or external resources.

As we’ve stated earlier at the provided sample, all counters had defined as an instance variables and so, they’re not safe when it comes to be processed by concurrent threads. For handling increments for all of them concurrently, we’ve stated them within a synchronized block.

Similar for Servlet, user requests for Portlet are handled through well-defined lifecycle that’s maintained by the Portlet container. This tutorial has focused on the lifecycle and its details as well as for threading issue. Contribute us by commenting below and find downloaded source code.