In this tutorial, we’ll be discussing Exception Handling in Kotlin.

All Exceptions descend from the Throwable class.
To throw an exception we use the throw keyword.

In Kotlin there are no checked exceptions. That means there is no throws keyword.

To handle exceptions we use the try-catch block. The piece of code that has a possibility to give an exception is set inside the try block. The exception is caught inside the catch block. Irrespective of what happens, the finally block is always run.
The finally blocks is optional. It’s generally used to release any resources that were used in the try-catch.
Typically a try can have multiple catches. Only the first matching catch would be run. Hence it’s recommended to stack the catches in the order: Specific Exception to General Exception.

Once an exception in the try block is found, it’ll not execute anything else in that try block.
We can even use a try with a finally.

With a try, at least one catch or finally block must be present.
throw is an expression which would print the stack trace as well.

Try is an expression

The value executed in a try-catch block can be returned and stored in a variable.

In the above code, we’re able to set the variable a with two different type of values.
If the try statement doesn’t execute the value of catch is set.
Irrespective of which is set, the finally statement is never set as the expression.

This is a shorthand for catching exceptions as shown below.

If the fail statement is executed the program won’t run after it’s printed. 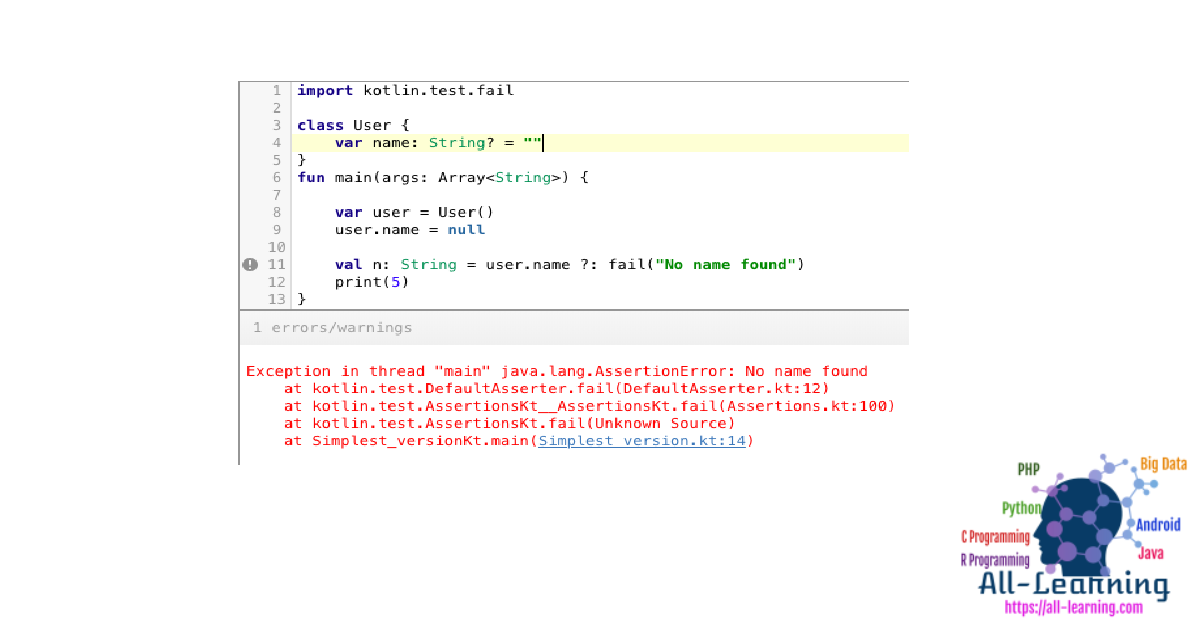 Implicitly the fail statement contains a throw keyword.
The fail function looks like this:

Nothing is a special return type which throw returns.

Now, we’ve seen that try-catch blocks can get messy and verbose.
Let’s use an inline function to make it concise since that’s where the strength of Kotlin code lies in.

This brings an end to this Kotlin tutorial on Exception handling.