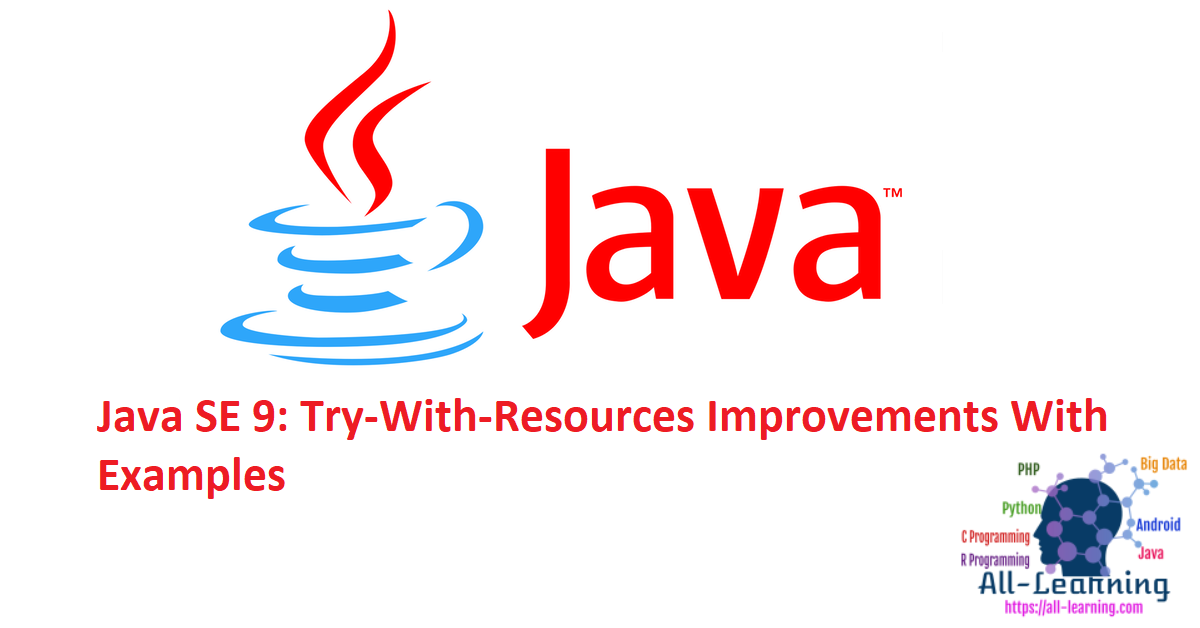 Oracle Corporation is going to release Java New Version: Java SE 9 around End of March 2017. So, I would like to deliver a series of Posts on Java SE 9 New Features. It’s my eighth post in this series.

In this post, we are going to discuss about some Improvements to Try-With-Resources in Java SE 9. Let us start exploring that construct now.

Java SE 7 has introduced a new construct: Try-With-Resources Statement for better Exception Handling. Without this construct, Developer has to write lot of redundant and ugly code. If Developer forgets about closing resources properly, we will get Resource Leakage issues in our application.

The main goals of this new feature is :

No need to check whether Resource reference is referring to an object or null.

Here we have created an utility method which creates a BufferedReader object to read the content of a file. If we observe the above code snippet, even though we have reader1 referring to BufferedReader object, we should create a duplicate one “reader2” to use it in Try-With-Resources. It is one small bug or issue in Java SE 7 or 8 versions.

Below code is invalid in Java SE 7 or 8 versions. It throws compile-time error.

NOTE:-
If you want to read more information about this component, please go through this tutorial: Java SE 7: Try-with-Resources

In Java SE 7 or 8 versions, we should follow these rules to use Try-With-Resources statement for Automatic Resource Management(ARM)

Java SE 9 has provided some improvements to Try-With-Resources statement. As we discussed in previous sections, Java SE 7 or 8 versions have one small issue or bug with this statement.

This example is a valid code with Java SE 9. We do not create another local variable like reader2 to refer reader1 as shown in Example-1. Let us execute both examples in Java SE 9 REPL to test them.

That’s it all about “Java SE 9: Try-With-Resources Improvements” new feature. We will discuss some more Java SE 9 New Features in my coming posts.

Thank you for reading my tutorials.