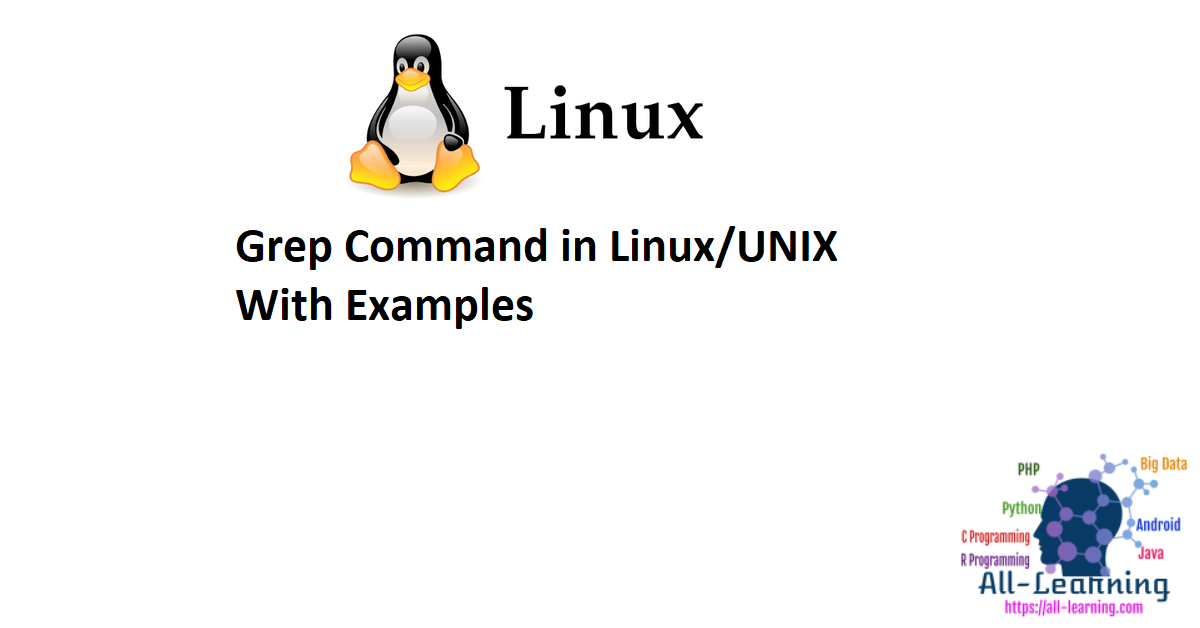 In Linux and Unix Systems Grep, short for “global regular expression print”, is a command used in searching and matching text files contained in the regular expressions. Furthermore, the command comes pre-installed in every Linux distribution. In this guide, we will look at Common grep command usage with a few examples.

Grep command can be used to find or search a regular expression or a string in a text file. To demonstrate this, let’s create a text file welcome.txt and add some content as shown.

Great! Now we are ready to perform a few grep commands and manipulate the output to get the desired results.

To search for a string in a file, run the command below 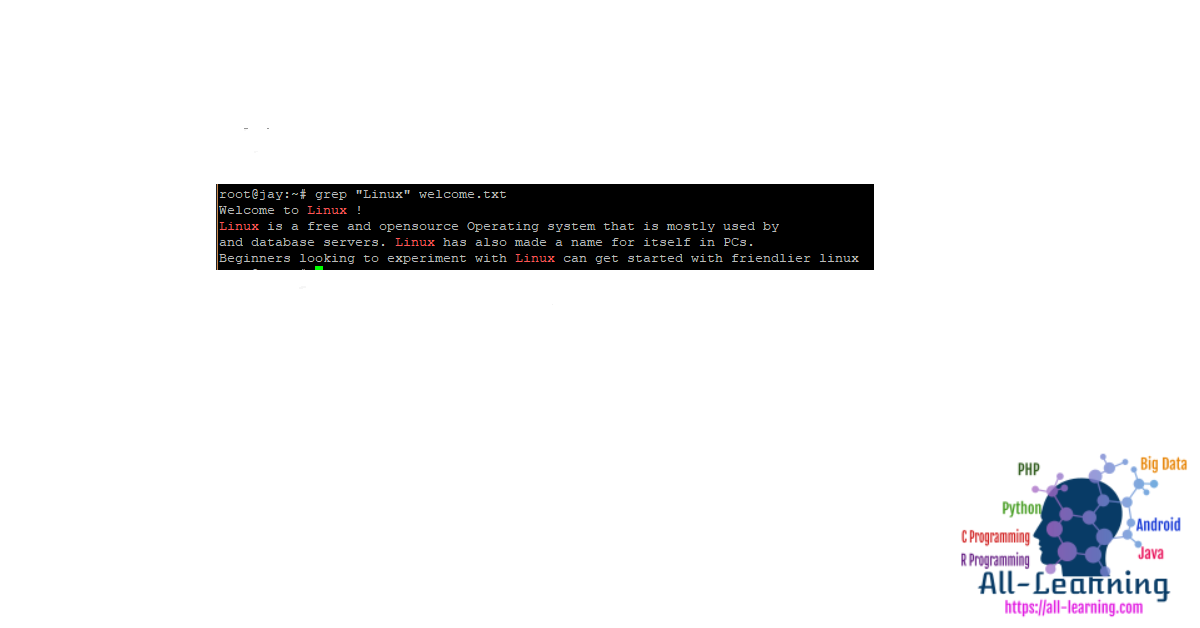 As you can see, grep has not only searched and matched the string “Linux” but has also printed the lines in which the string appears.

If the file is located in a different file path, be sure to specify the file path as shown below

If you are working on a system that doesn’t display the search string or pattern in a different color from the rest of the text, use the --color to make your results stand out. 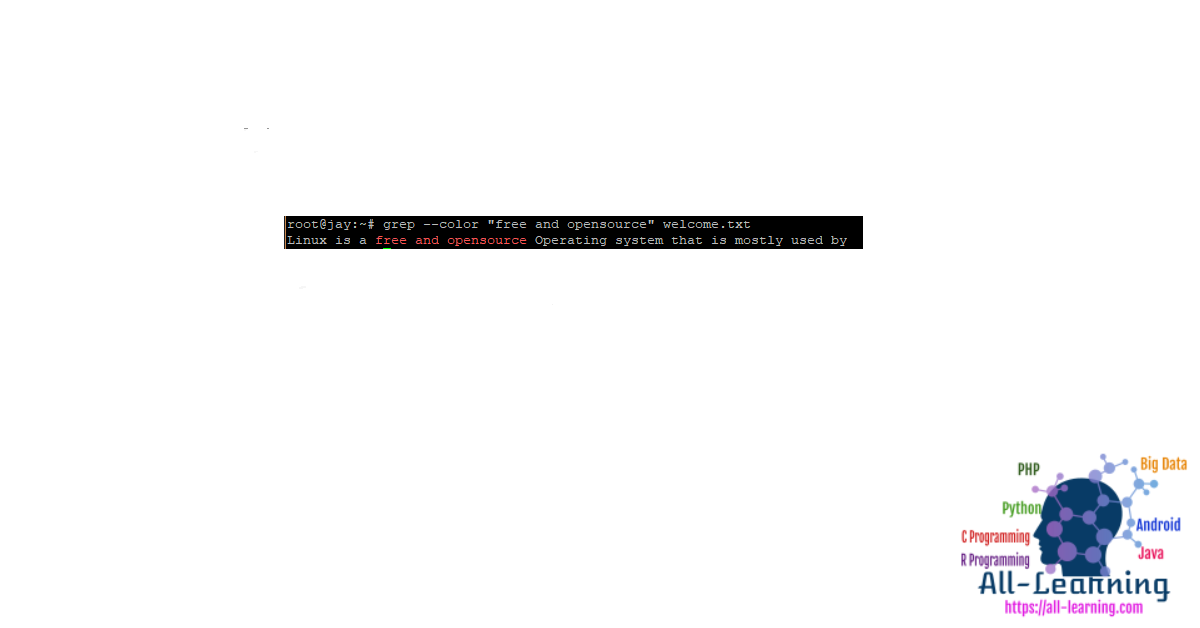 Searching for a string recursively in all directories

If you wish to search for a string in your current directory and all other subdirectories, search using the - r flag as shown 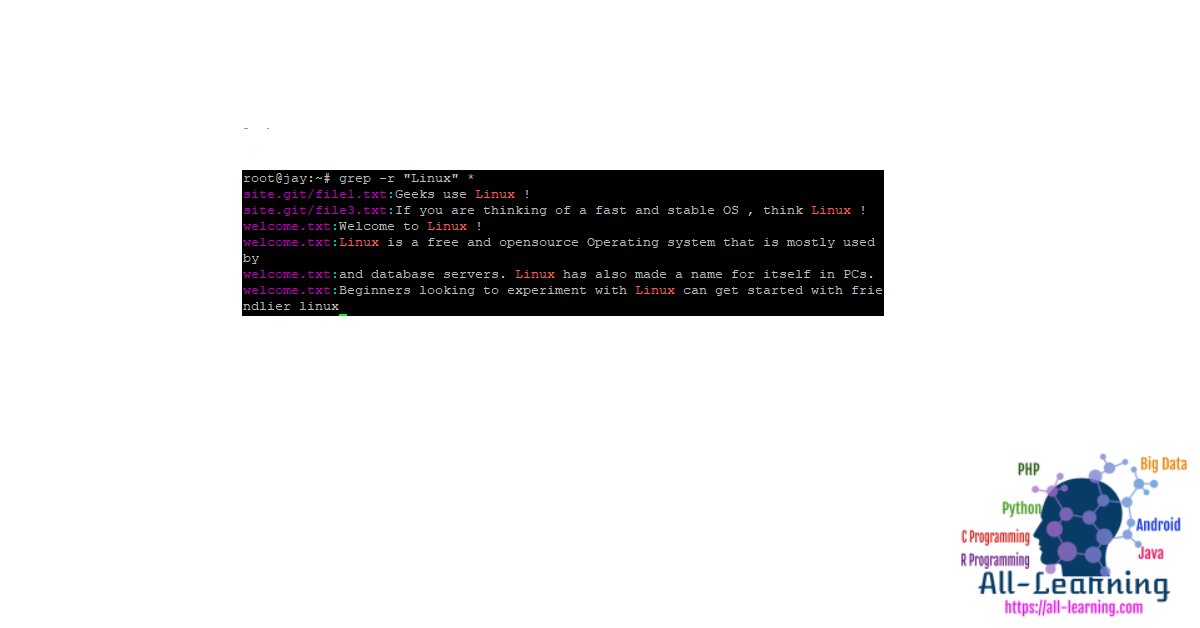 In the above example, our search results gave us what we wanted because the string “Linux” was specified in Uppercase and also exists in the file in Uppercase. Now let’s try and search for the string in lowercase.

Nothing from the output, right? This is because grepping could not find and match the string “linux” since the first letter is Lowercase. To ignore case sensitivity, use the -i flag and execute the command below

Awesome isn’t’ it? The - i is normally used to display strings regardless of their case sensitivity.

Count the lines where strings are matched with -c option

To count the total number of lines where the string pattern appears or resides, execute the command below 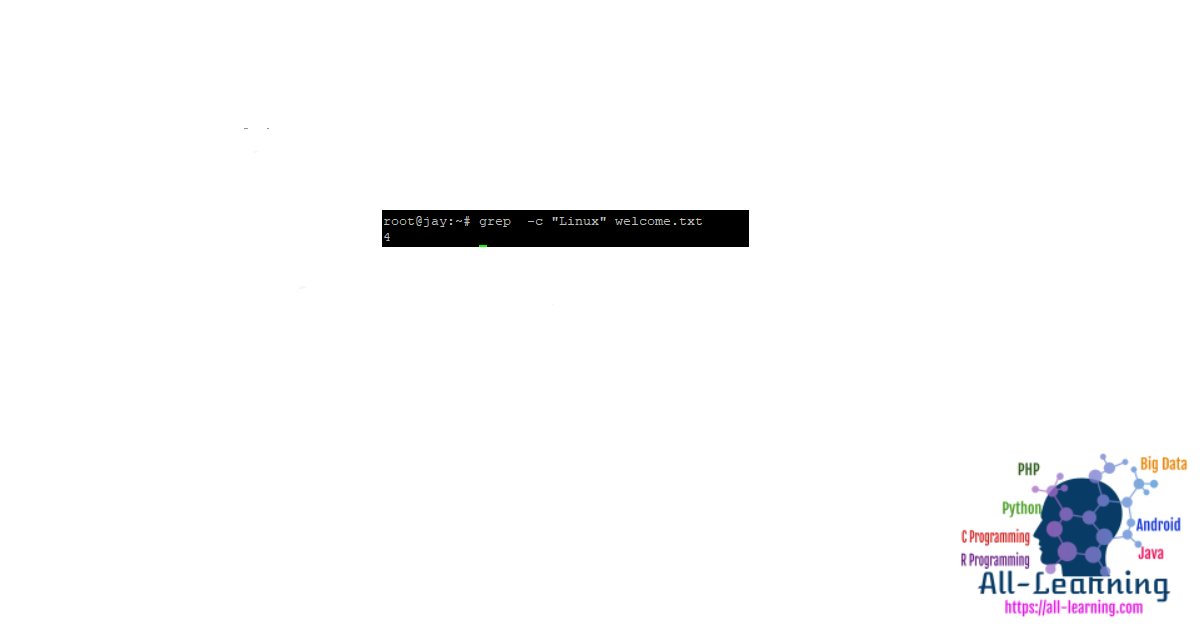 To invert the Grep output , use the -v flag. The -v option instructs grep to print all lines that do not contain or match the expression.

The –v option tells grep to invert its output, meaning that instead of printing matching lines, do the opposite and print all of the lines that don’t match the expression. Going back to our file, let us display the line numbers as shown. 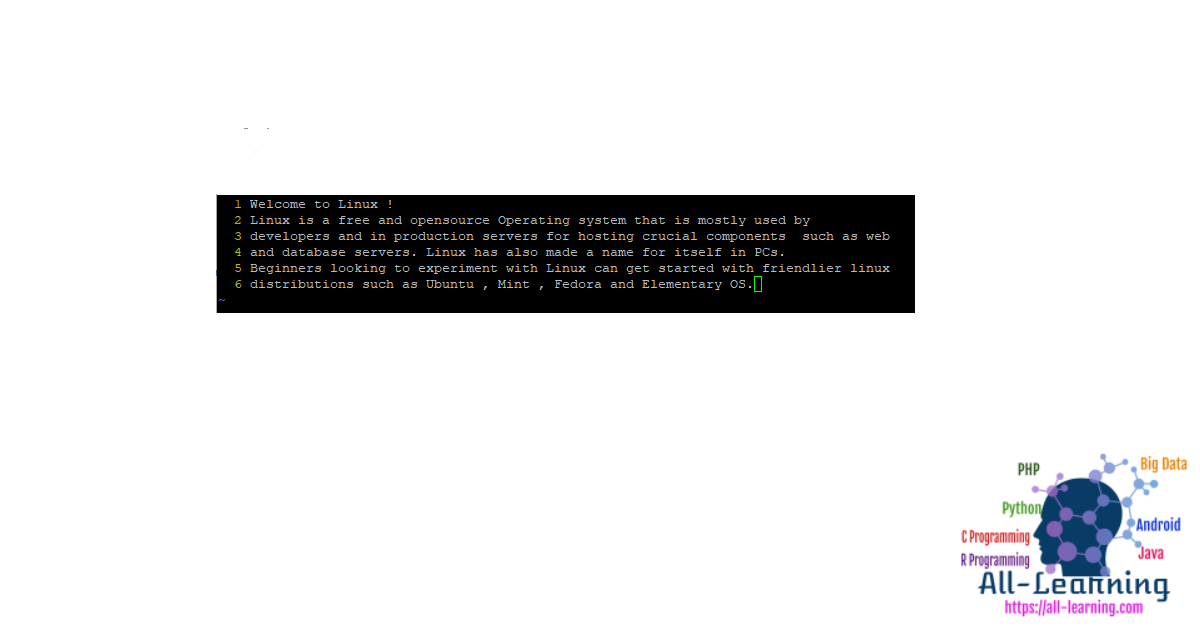 Now, to display the lines that don’t contain the string “Linux” run

As you can see, grep has displayed the lines that do not contain the search pattern.

Number the lines that contain the search pattern with -n option

To number the lines where the string pattern is matched , use the -n option as shown

However, if you try

NO results will be returned because we are not searching for a pattern but an exact word!

The grep command can be used together with pipes for getting distinct output.

For example, If you want to know if a certain package is installed in Ubuntu system execute

For example, to find out if OpenSSH has been installed in your system pipe the dpkg -l command to grep as shown 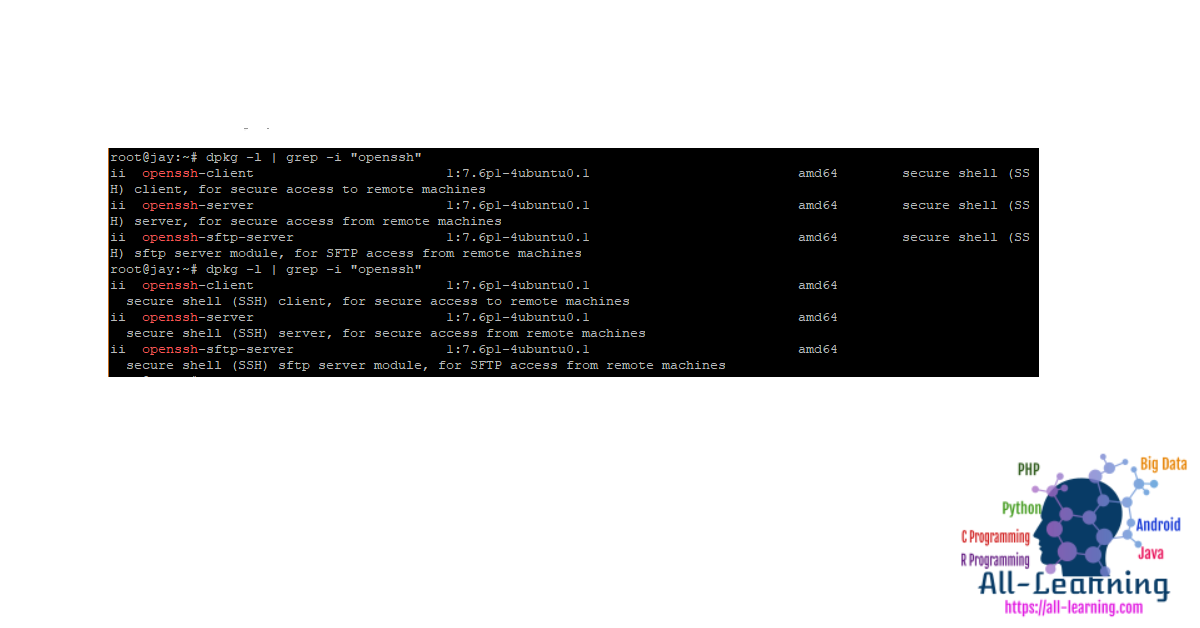 This command displays the line containing the string plus 4 lines of text after the ens string in the ifconfig command.

Conversely, in the example below, the use of the -B flag will display the line containing the search string plus 3 lines of text
before the ether string in the ifconfig command.

The term REGEX is an acronym for REGular EXpression. A REGEX is a sequence of characters that is used to match a pattern. Below are a few examples:

Example
To print lines beginning with a certain character, the syntax is;

For instance, to display the lines that begin with the letter “d” in our welcome.txt file, we would execute

To display lines that end with the letter ‘x’ run 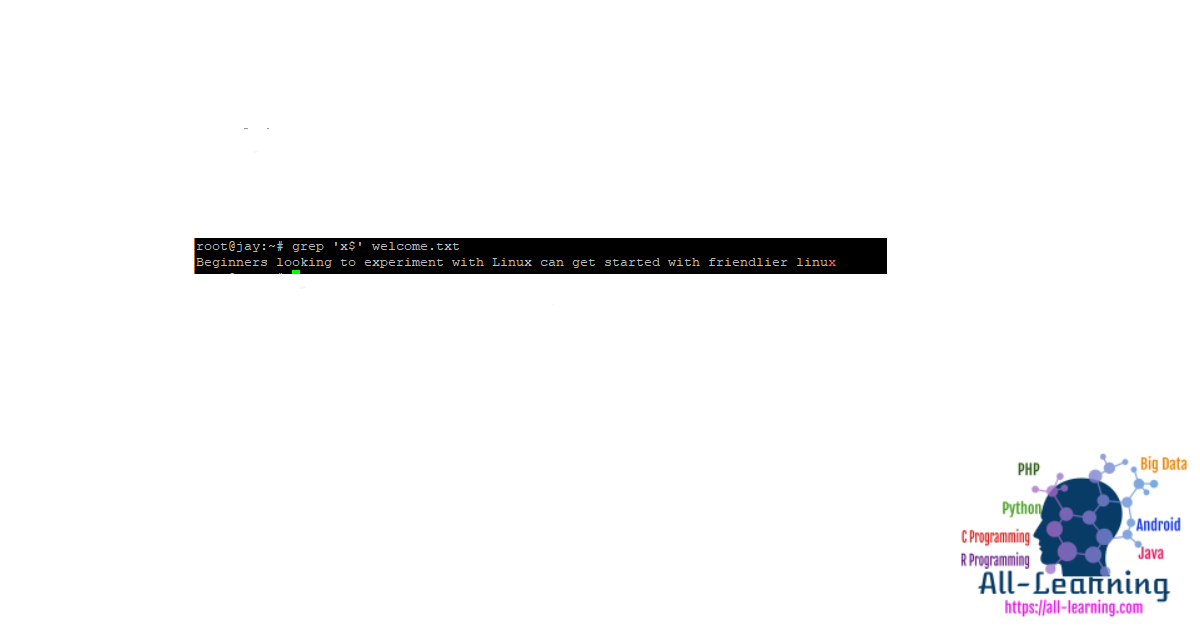 Getting help with more Grep options

If you need to learn more on Grep command usage, run the command below to get a sneak preview of other flags or options that you may use together with the command. 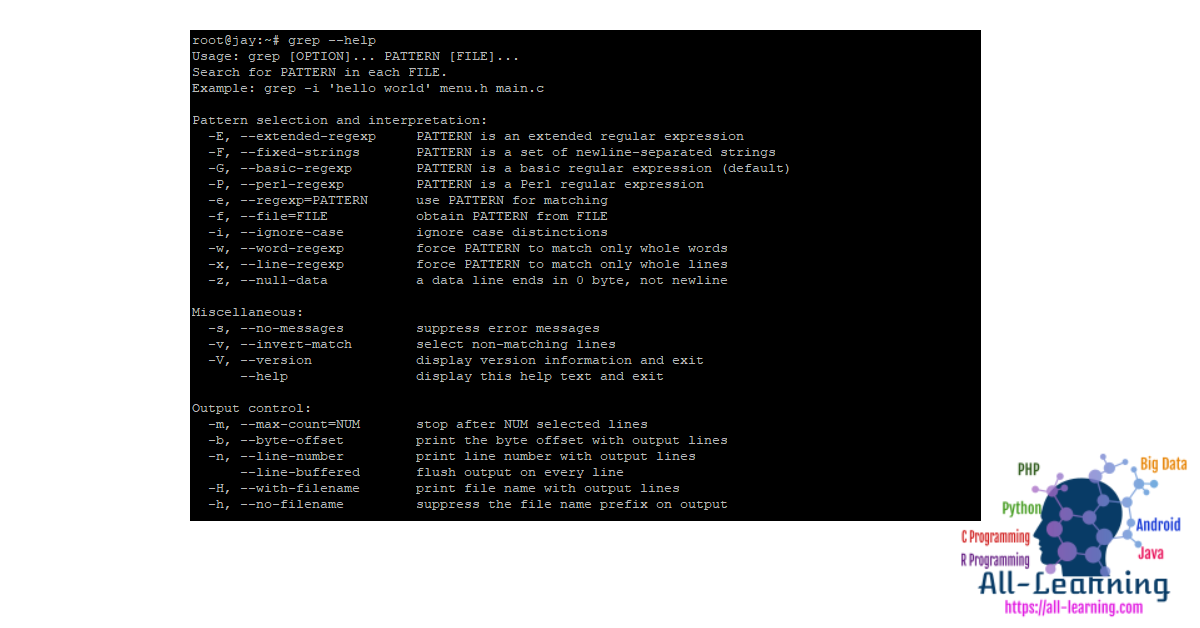 We appreciate your time for going through this tutorial. Feel free to try out the commands and let us know how it went.