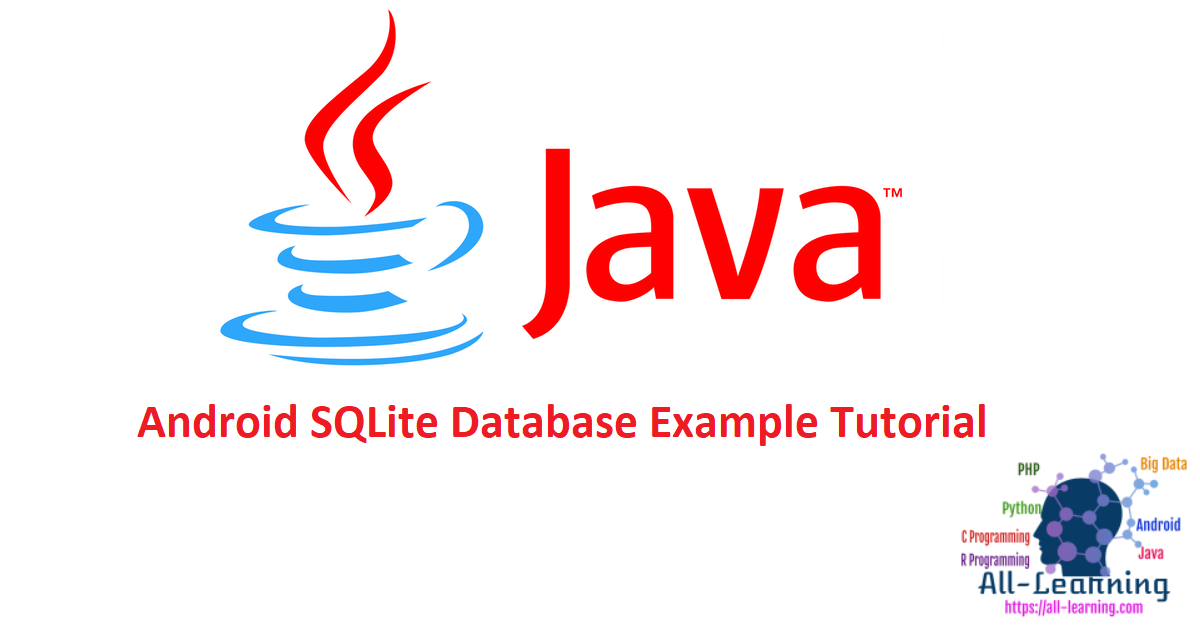 Android SQLite is a very lightweight database which comes with Android OS. Android SQLite combines a clean SQL interface with a very small memory footprint and decent speed. For Android, SQLite is “baked into” the Android runtime, so every Android application can create its own SQLite databases.

Android SQLite native API is not JDBC, as JDBC might be too much overhead for a memory-limited smartphone. Once a database is created successfully its located in data/data//databases/ accessible from Android Device Monitor.

SQLite is a typical relational database, containing tables (which consists of rows and columns), indexes etc. We can create our own tables to hold the data accordingly. This structure is referred to as a schema.

Android has features available to handle changing database schemas, which mostly depend on using the SQLiteOpenHelper class.

SQLiteOpenHelper is designed to get rid of two very common problems.

We define a DBManager class to perform all database CRUD(Create, Read, Update and Delete) operations.

Before performing any database operations like insert, update, delete records in a table, first open the database connection by calling getWritableDatabase() method as shown below:

The dbHelper is an instance of the subclass of SQLiteOpenHelper.

To close a database connection the following method is invoked.

The following code snippet shows how to insert a new record in the android SQLite database.

Content Values creates an empty set of values using the given initial size. We’ll discuss the other instance values when we jump into the coding part.

The following snippet shows how to update a single record.

We just need to pass the id of the record to be deleted as shown below.

A Cursor represents the entire result set of the query. Once the query is fetched a call to cursor.moveToFirst() is made. Calling moveToFirst() does two things:

The following code is used to fetch all records:

Let’s jump to our project that uses SQLite to store some meaningful data. 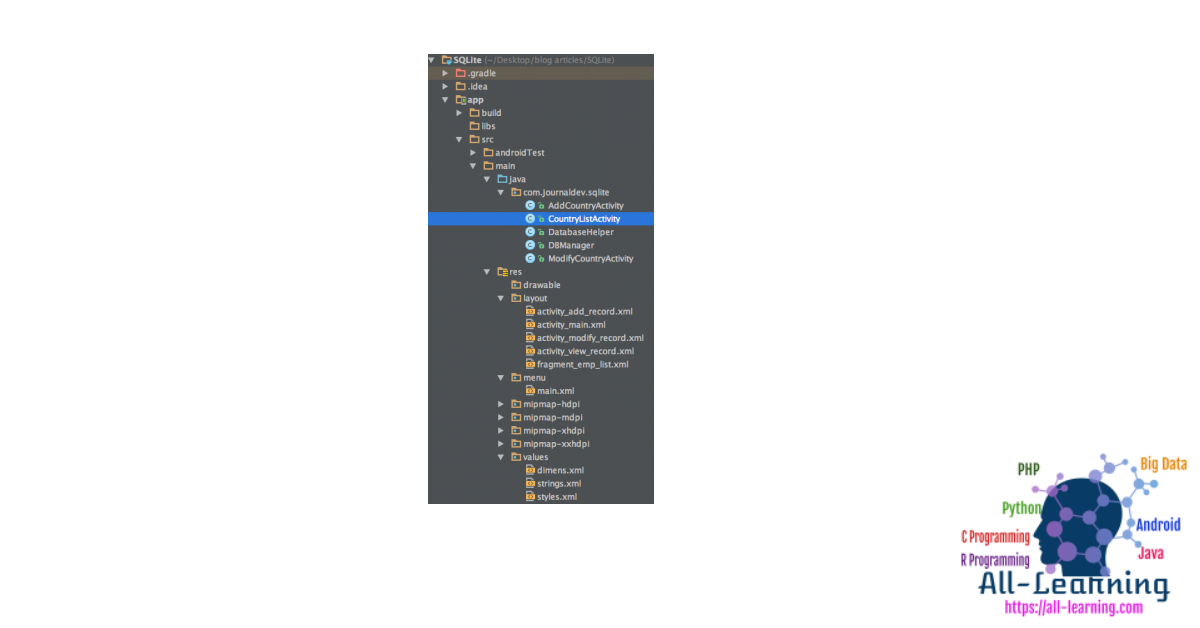 In this application we wish to create records that store Country names and their respective currencies in the form of a ListView. We cover all the features discusses above.

The application consists of 5 classes. We begin with defining with DatabaseHelper, which is a subclass of SQLiteOpenHelper as follows:

As discussed above we have overridden the onCreate() and onUpgrade() methods besides the constructor. We’ve assigned the names to the database and the table as JOURNALDEV_COUNTRIES.DB and COUNTRIES respectively. The index column is auto incremented whenever a new row is inserted. The column names for country and currency are “subject” and “description”.

The DBManager classes is where the DatabaseHelper is initialized and the CRUD Operations are defined. Below is the code for this class:

The CountryListActivity.java class is the activity which is launched when the application starts. Below is layout defined for it:

Here a ListView component is defined to included the records stored in the database. Initially the ListView would be empty hence a TextView is used to display the same.

In this activity the DBManager object is invoked to perform the CRUD Operations.

A SimpleCursorAdapter is defined to add elements to the list from the query results that are returned in an Cursor Object.
On list item click an intent is performed to open the ModifyCountryActivity class.

The menu contains an item to add a new record from the ActionBar. Here again an intent is performed to open the AddCountryActivity class. Below is menu.xml code.

The xml layout and code of AddCountryActivity.java file are defined below:

Two EditText components that take the inputs for country and currency along with a button to add the values to the database and display it in the ListView are defined.

The CRUD operation performed here is adding a new record to the database.

The xml layout and code of ModifyCountryActivity.java file are defined below:

It’s similar to the previous layout except that modify and delete buttons are added.

The CRUD operations performed here are updating and deleting a record.

The below images are the screenshots of the final output of our project.

The first image is the output seen when the application is launched for the first time. 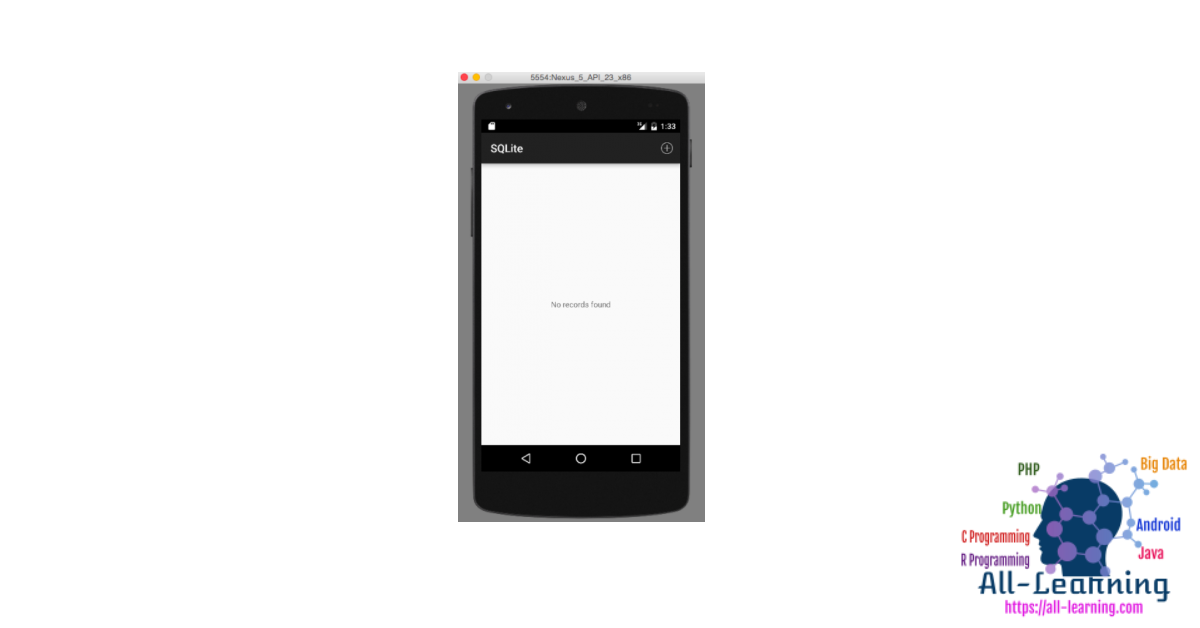 The second image is the result of clicking the menu option from the ActionBar to add a new record as shown below. 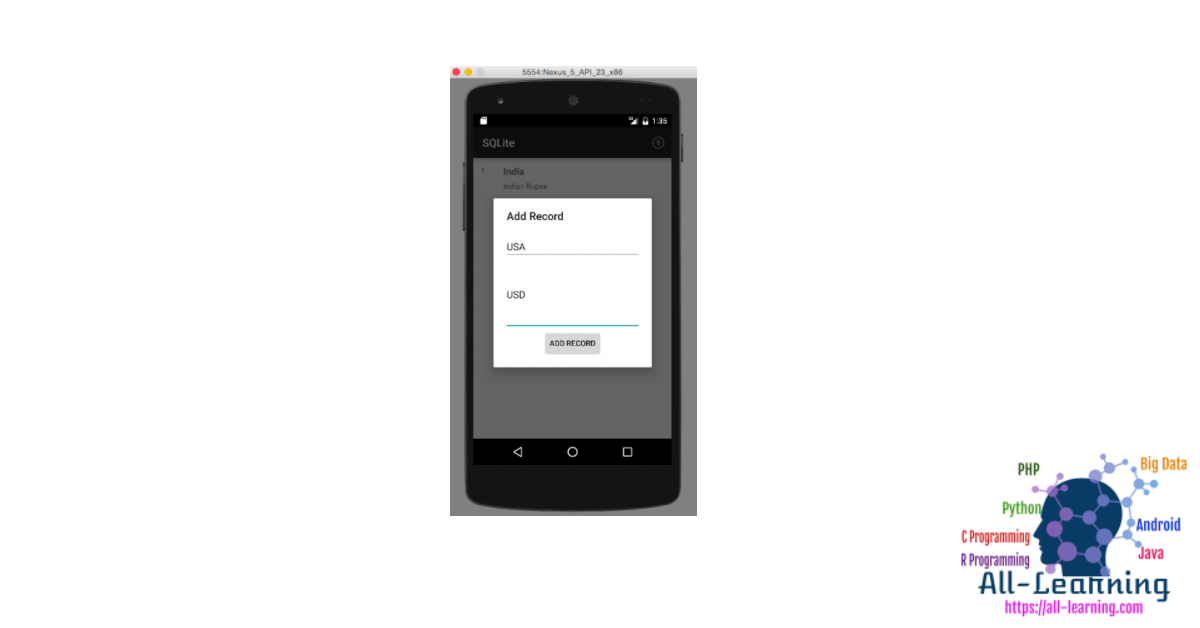 The third image shows an output when 3 records are added : 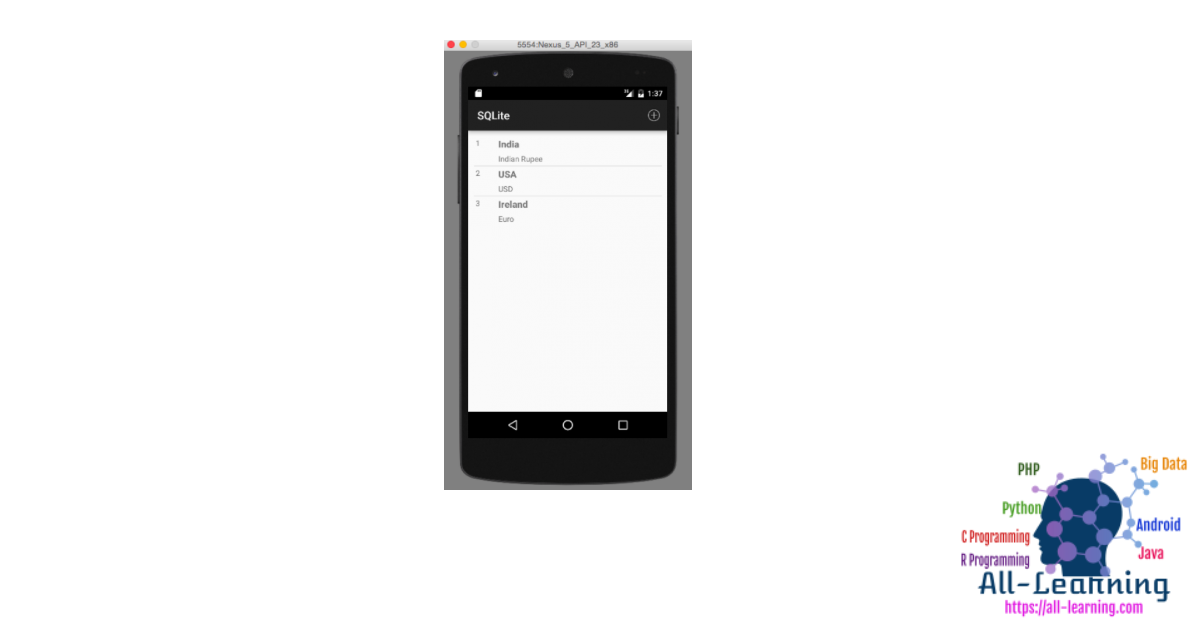 The fourth image shows the output when any list item is clicked to modify or delete a record :

The final image is the output when a record is deleted. In this example we delete the first record :

To view this database we need to pull this file from the device to our desktop. This is done by clicking the menu option in the top right as seen in the image below : 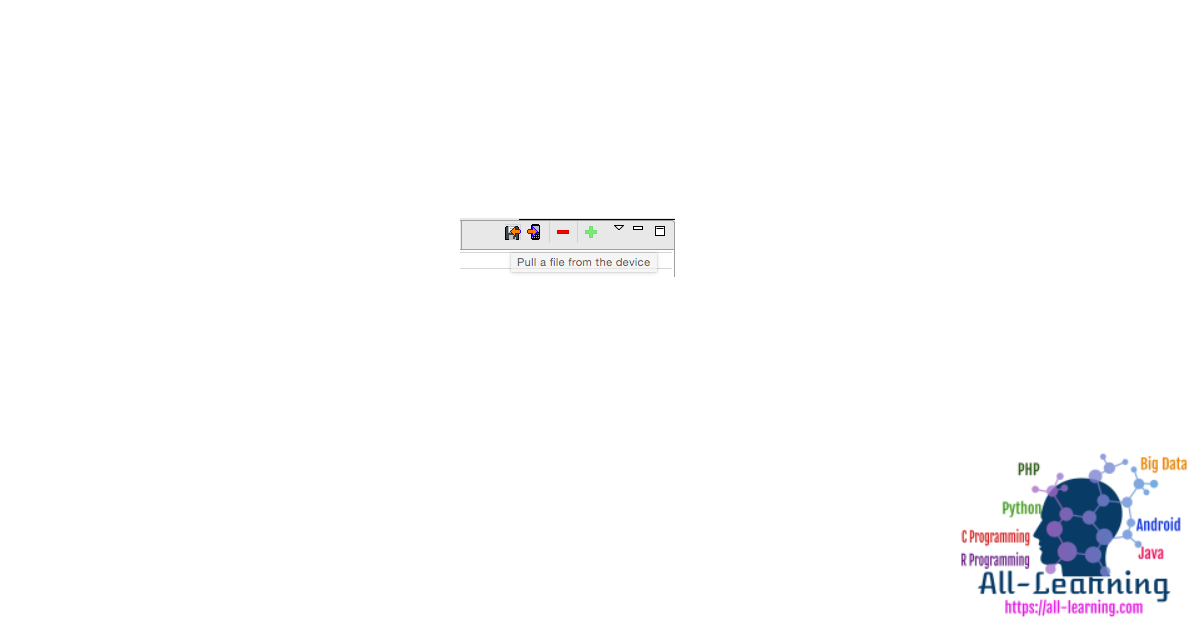 To open this file download the SQLiteBrowser from this link.

The snippets below show the schema and tables in the browser. 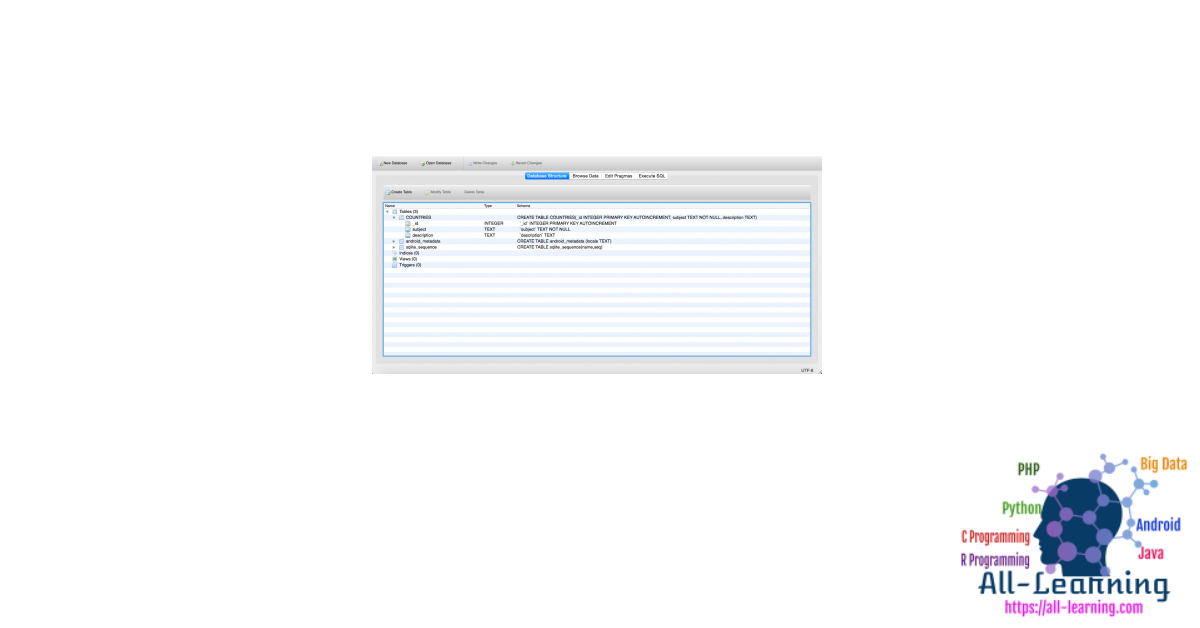 To view the table go to the Browse Data tab on top. The following image is seen: 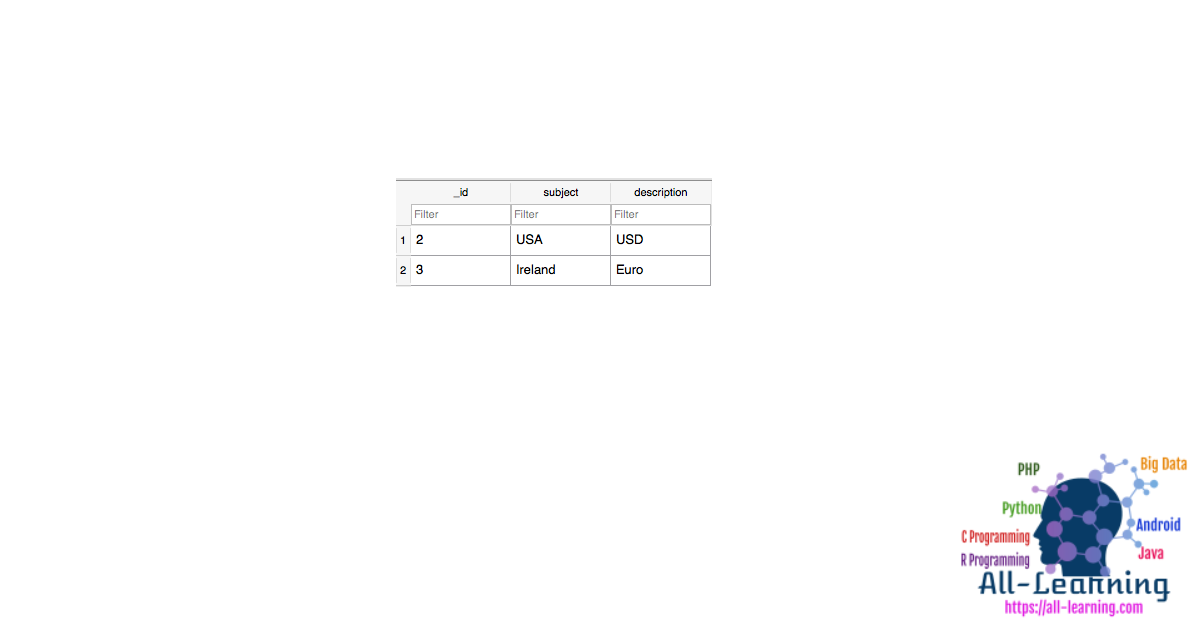