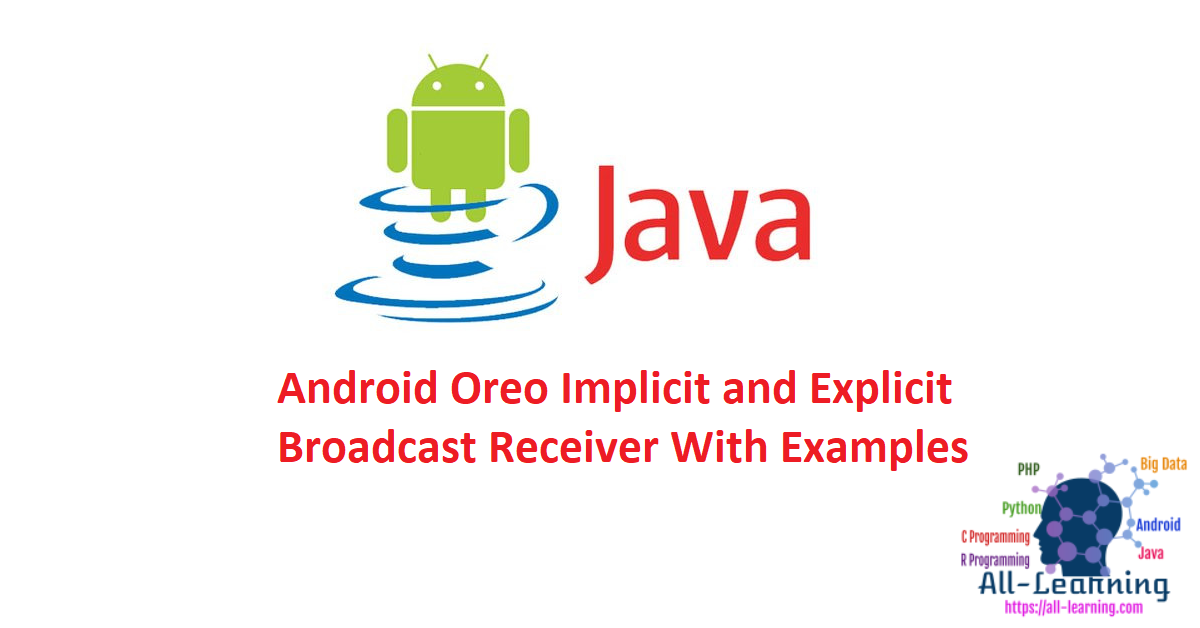 In this tutorial, we’ll discuss the changes in Broadcast Receiver since Android Oreo. We’ll see why the restrictions have been put on Background Operations in Android.

Broadcast Receivers are like Antennas. Just like Antennas can be tuned to catch certain frequencies, broadcast receivers can be registered to certain intent actions. When that action event triggers, the BroadcastReceiver gets called.

Before we differentiate, let’s know the difference between Implicit and Explicit Intents.

Take the example of capturing a photo from camera or gallery. It’s an implicit intent, since calling the intent shows you a dialog of different applications to choose from. Same goes for email/browser intents (if they show you a dialog chooser).

Implicit Broadcast Receivers aren’t exclusive to your application.
Actions such as ACTION_BOOT_COMPLETED or CONNECTIVITY_CHANGE are categorised in implicit broadcast receivers. This is because when these events happen, all the applications registered with the event will get the information.

Explicit Broadcast Receivers are exclusive to your application. Only your application’s broadcast receiver will get triggered when the custom intent action you define, gets called.

Now, broadcast receivers run in the background. Hence it drains the battery. Imagine every application has registered android.net.conn.CONNECTIVITY_CHANGE in the receiver which is implicit.

Now, whenever the wifi/mobile internet connection toggles, all the applications, with the receiver would get triggered. Imagine what happens when your wifi router is unstable. It can cause battery issues.

Since Android Oreo, implicit broadcast receivers won’t work when registered in the AndroidManifest.xml

How to handle Implicit Receivers in Android Oreo?

To use Implicit Receivers in your application, you need to define them programmatically in your code, using registerReceiver().

Using registerReceiver() we can programmatically register and unregisterReceiver() during the lifecycle of the activity. This way implicit receivers would only be called when our activity/application is alive and not at other times.

Besides registering receivers programmatically, we can use JobSchedulers too.

Several Implicit Broadcasts are exempted and can be declared in the Manifest: 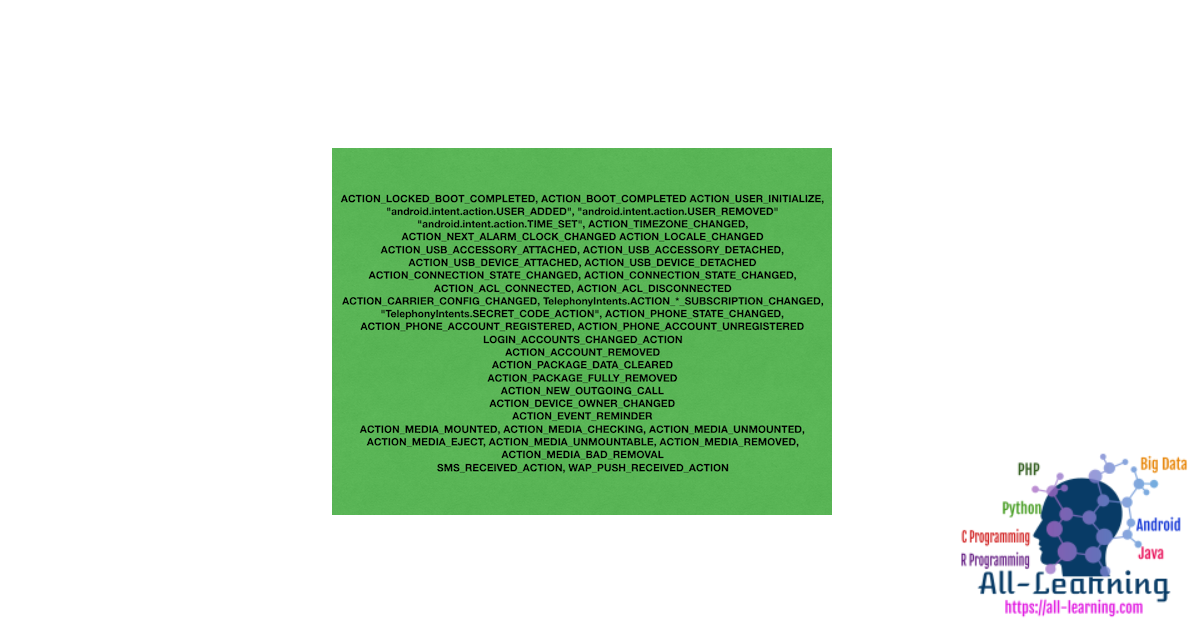 In the next section, we’ll be creating an application which implements Broadcast Receivers keeping the Android Oreo limitations. 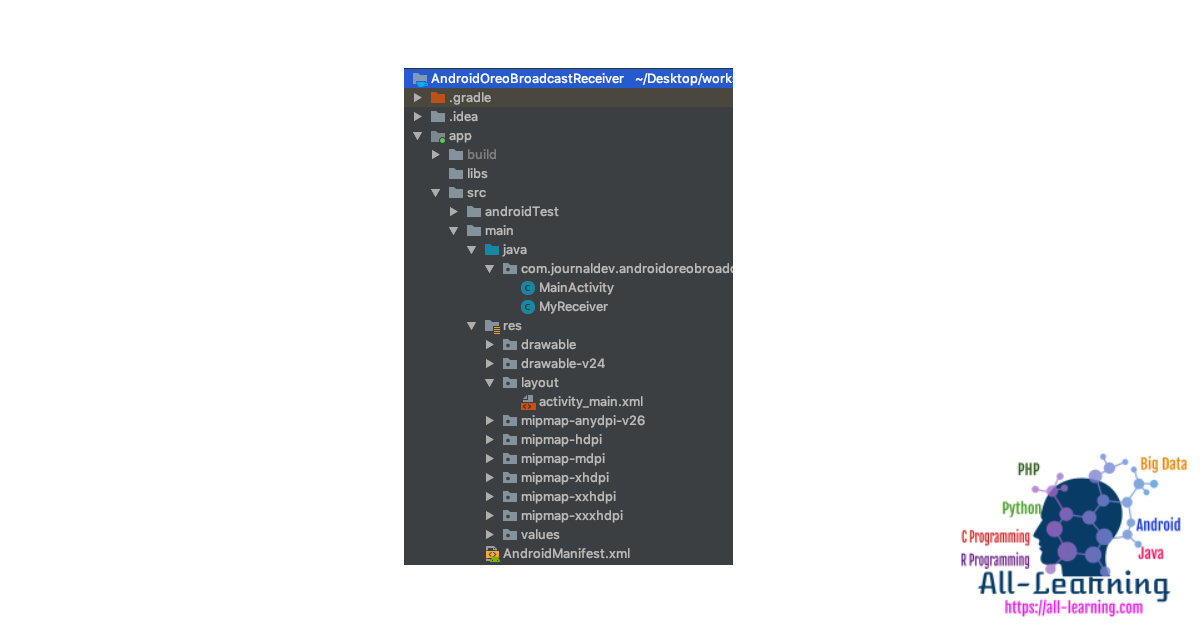 We’ve defined an intent filter with an action which is explicit.

Implicit ones will be defined in the code only:

On button click sendBroadcast() is called to send the explicit broadcast.

Note: sendStickyBroadcasts() were used to send broadcast intents that stayed around for other receivers to access them at a later point. The method was deprecated in API 21.

The code for the MyReceiver.java BroadcastReceiver class is given below:

A LocalBroadcastManager is used to send or receive events locally within the current application only.

LocalBroadcastManager does not listen to system-wide broadcasts and is more secure than BroadcastReceiver.
Plus it has a less overhead hence communication speed is faster.

It can be initialised as:

LocalBroadcastManager would fail if you make events that are system wide.

Set the android:exported attribute to “false” in the receiver tag in the manifest restricts the application from receiving broadcasts from other applications.

This brings an end to this tutorial. You can download the project from the below link: