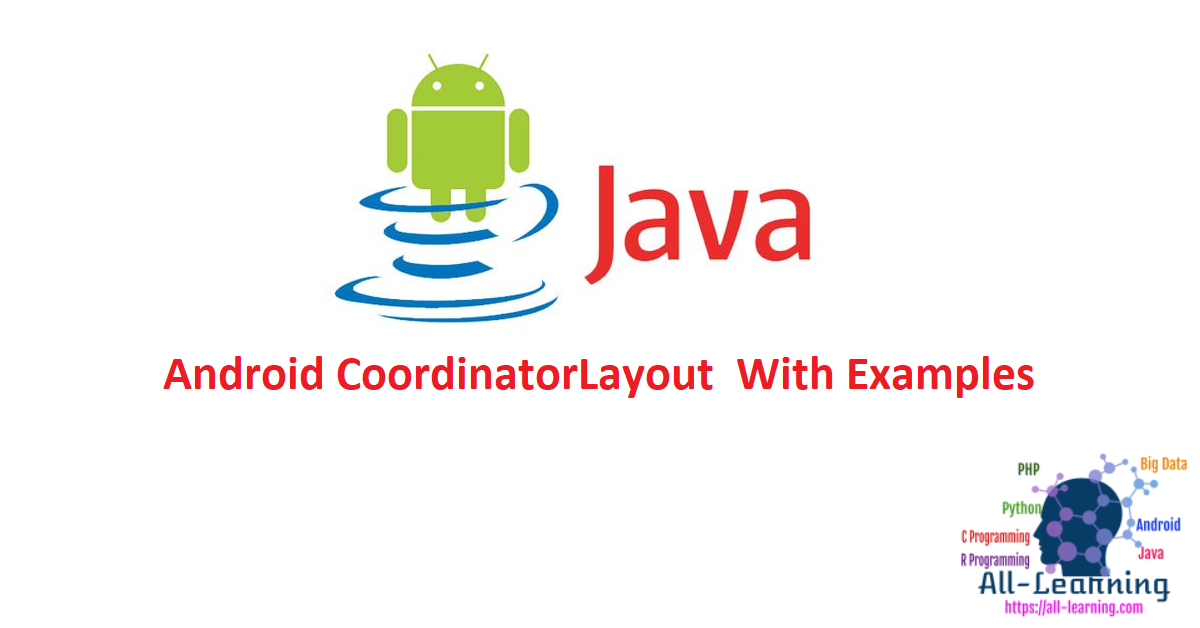 Android CoordinatorLayout is a super-powered FrameLayout. It has a lot more to offer than it seems. It has additional level of control over it’s child views. It coordinates the animations and transitions of child views with one another.

Let’s create a new Android Studio project and choose the Basic Activity template that has CoordinatorLayout by default. The layout consists of a Floating Action Button. Clicking it displays a SnackBar as shown below.

Did you notice that the Floating Action Button animates up to make way for the SnackBar and comes back when the SnackBar disappear?

This is no magic. It’s how the Floating Action Button behaves inside a CoordinatorLayout.

Note : CoordinatorLayout can also expand the ToolBar to show more content or collapse it while scrolling, something that is commonly seen when you scroll a WhatsApp User’s profile screen. Don’t worry, we’ll look into this in a later tutorial.

A question that would be popping up in our heads now – How does the CoordinatorLayout know what to do with the child view? The answer lies in the next section.

The FAB within a CoordinatorLayout has been specified a default Behavior that causes it to animate accordingly when another view interacts with it.

Do a Ctrl/CMD+ Click on the FloatingActionButton in the layout/activity and you shall see a Behavior has been defined on the class with an annotation.
It should look like this:

FloatingActionButton.Behavior is the default Behavior class used on the FAB.
We can define our own Behaviors by extending the class CoordinatorLayout.Behavior.

Here T is the class whose Behavior we wish to define. In the above case it is CoordinatorLayout.Behavior.

Now let’s add a Button widget at the bottom of our screen.
activity_main.xml

We’ve commented out the FAB from the above layout. Now replace the FloatingActionButton listener with the AppCompatButton in the MainActivity.java as shown below.

This is how the application looks now. Any guesses?

To define the custom Behavior we need to be aware of two important elements:

In the above case the AppCompatButton is the child and the SnackBar is the dependency.

Let’s start by creating our own custom Behavior class that moves up the AppCompatButton. Let’s name it CustomMoveUpBehavior.java.

The two neccessary methods that should be overridden in the above class are layoutDependsOn and onDependentViewChanged.
Let’s add override them in our class.

The layoutDependsOn checks whether the dependency that’ll trigger the behavior is an instanceof SnackBar.
The onDependentViewChanged is used to move up the child view(AppCompatbutton) based on a basic math calculation.

Attaching the Behavior to android CoordinatorLayout

To attach the CustomMoveUpBehavior.java we’ll create a Custom AppCompatButton and add the annotations as shown below.

Replace the AppCompatButton xml tag with the following one.

The application when run now should look like this:

Wasn’t it cool? Now let’s try to implement a Custom Behavior for the FAB. We’ll trigger it to rotate and move up when the SnackBar is displayed.
We’ve implemented a CustomRotateBehavior.java class. It’s given below.

The method getFabTranslationYForSnackbar(parent,child) calculates how far up the screen should the SnackBar come up for the FAB to start changing. Before we do the relevant changes, let’s browse through our project structure. 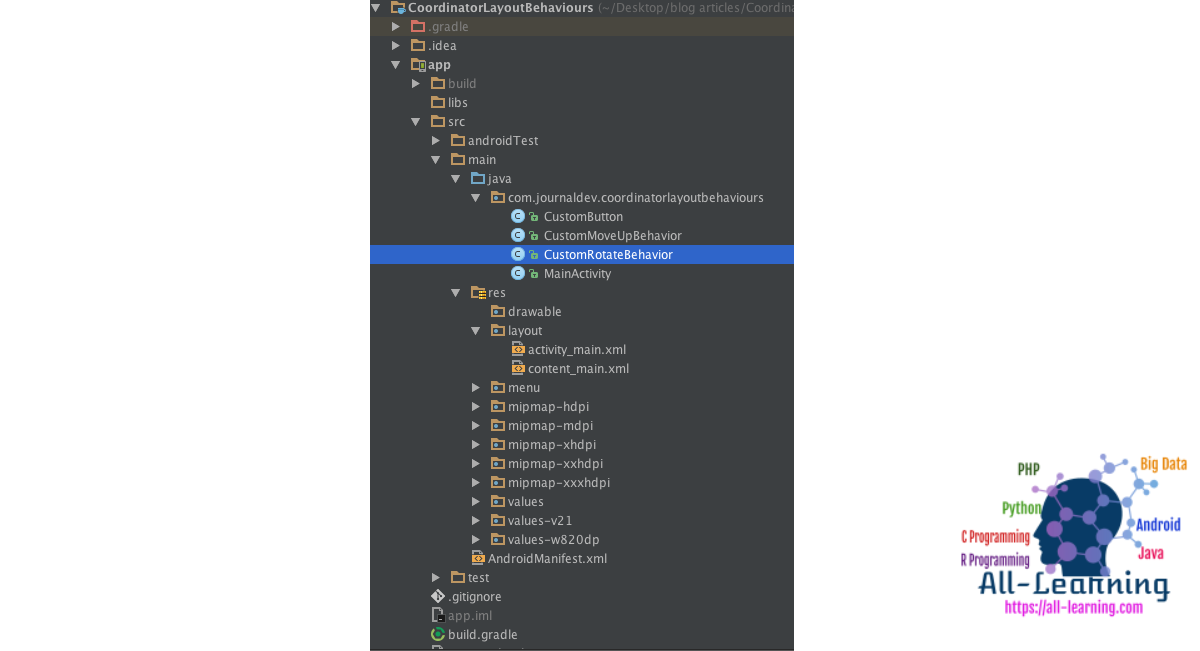 This is how our activity_main.xml looks now.

Let’s run our application one last time to see the new Behavior.

This brings an end to Android CoordinatorLayout Example. We started with browsing through the default Behavior of the FAB widget and have ended up with overriding it with our own Rotation Behavior.

Not to miss out the Behavior on a Button too. It’s a long way. You can download the Android CoordinatorLayoutBehaviours Project from the below link.